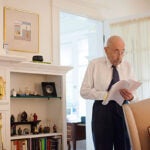 According to a large, long-term study from Harvard School of Public Health (HSPH), 40 percent of all colorectal cancers might be prevented if people underwent regular colonoscopy screening. The new research also supports existing guidelines that recommend that people with an average risk of colorectal cancer should have a colonoscopy every 10 years.

The new study helps address previous uncertainty about the effectiveness of colonoscopy in reducing colorectal cancer incidence and mortality — particularly among people with cancer that originates in the proximal, or upper, part of the colon. The study will appear in the Sept. 19 issue of the New England Journal of Medicine.

Colorectal cancer is the second-leading cause of cancer-related death in the nation.

“Colonoscopy is the most commonly used screening test in the U.S., but there was insufficient evidence on how much it reduces the risk of proximal colon cancer and how often people should undergo the procedure,” said Shuji Ogino, co-senior author and associate professor in the Department of Epidemiology at HSPH. “Our study provides strong evidence that colonoscopy is an effective technique for preventing cancers of both distal and proximal regions of the colorectum, while sigmoidoscopy alone is insufficient for preventing proximal cancer.”

According to the most recent statistics from the Centers for Disease Control and Prevention, nearly 137,000 people in the U.S. were diagnosed with colorectal cancer in 2009, and nearly 52,000 died that year from the disease. Colorectal cancer is the second-leading cause of cancer-related death in the nation. The researchers analyzed data from 88,902 participants in two long-term studies: the Nurses’ Health Study and the Health Professionals Follow-Up Study. Based on data from questionnaires that participants filled out every two years between 1988 and 2008, the researchers obtained information on colonoscopy and sigmoidoscopy procedures. They documented 1,815 cases of colorectal cancer and 474 deaths from the disease.

They found that both colonoscopy and sigmoidoscopy, which screens for tumors in the distal, or lower, part of the colorectum, were associated with decreased risk of either getting colorectal cancer or dying from it. Only colonoscopy decreased the risk for cancers originating in the proximal colon, but not to the degree of its protective effect against distal colorectal cancers. The researchers suggested that colonoscopy’s smaller effect in reducing risk for tumors in the proximal colon might be due in part to molecular or biological differences in those cancers.

• The researchers estimated that if all participants in the study had undergone colonoscopies, 40 percent of colorectal cancers — including 61 percent of distal cancers and 22 percent of proximal cancers — would have been prevented.

• Sigmoidoscopy alone is likely insufficient for reducing the incidence or death risk of colorectal cancer that originates in the upper colon.

• People who get a clean bill of health after a colonoscopy have a significantly reduced risk of colorectal cancer for up to 15 years after the procedure, although the data support repeat screening at shorter intervals among individuals with a personal history of adenoma — a benign tumor of glandular origin that can become malignant over time — or a family history of colorectal cancer.

“Each year, more than 1.2 million people are diagnosed with colorectal cancer worldwide. Our findings could help improve and strengthen the current guidelines for colorectal cancer screening,” said Reiko Nishihara, lead author and research fellow in the Department of Nutrition at HSPH.

Support for the study came from the National Institutes of Health, the Bennett Family Foundation, and the Entertainment Industry Foundation through the National Colorectal Cancer Research Alliance.