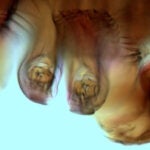 Seeing depth through a single lens

The average Haitian gets nine liters of water a day, less than half of the World Health Organization’s recommended minimum of 20 liters.

In Haiti, the water situation starts with scarcity and gets worse. According to a study by Mary C. Smith Fawzi, an assistant professor at Harvard Medical School, and her colleagues, 74 percent of samples in a survey of 45 households in the city of Port-de-Paix contained coliform bacteria, an indication of fecal contamination.

In addition, just 27 percent of residents had access to some kind of improved water source: a protected well, a shared public water source, bottled water, or, for just 4 percent of families, water piped into the house. Even dirty water was costly, with prices rising in the years before the survey, conducted in 2007, when water cost families an estimated 10 percent of household income.

The plight of Haitians was just one part of the global water picture painted for 31 high school and middle school teachers last week at Harvard’s Barker Center.

The program, “Teaching Water: Global Perspectives on a Resource in Crisis,” was a collaborative outreach program by several of Harvard’s regional institutes and centers, including the Asia Center, the Center for Middle Eastern Studies, the Committee on African Studies, the David Rockefeller Center for Latin American Studies, the Davis Center for Russian and Eurasian Studies, the Prince Alwaleed bin Talal Islamic Studies Program, the Reischauer Institute of Japanese Studies, and the Harvard Global Health Institute. Four of these centers have been designated National Resource Centers by the U.S. Department of Education and, as such, include outreach to K-12 teachers and students as part of their mission.

The program offered teachers a broad look at an issue increasingly viewed with alarm. The United Nations has designated 2013 as the International Year of Water Cooperation to raise awareness of the challenges ahead. With global climate change expected to alter rainfall patterns and increase desertification, the major issue in some regions is dealing with scarcity. In others, however, sanitation and public health issues are paramount. In others, water issues — such as those involving bordering rivers and lakes — are wrapped up in geopolitical concerns.

The collaboration of the regional centers and programs provides a global perspective to teachers that might be missing if only one organization presented the material, according to Cris Martin, outreach director of the Davis Center. That’s important, Martin said, because classroom teachers at the middle and high school level are often concerned about globe-spanning issues and less with how that issue would impact one region.

“Water is the new oil,” Martin said. “Everybody’s thinking about water, which is good news because there are a lot of resources out there.”

The Harvard Global Health Institute joined the regional programs in sponsoring the workshop. Emily Robinson, senior project coordinator of the institute, said it decided to participate because water is “inextricable” from global health. Clean water is required for life. Yet water also provides a place for malaria-carrying mosquitoes to breed and is a direct carrier of illness, including diarrheal ailments, which are a major cause of child mortality, waterborne cholera, and parasitic diseases like schistosomiasis and guinea worm disease.

“We were really excited to hear the centers were doing this. This was a unique opportunity to get involved in a cross-University global event focused on education,” Robinson said.

The four-day workshop ran from Aug. 5 to 8 and covered topics that included water and world health, shortages on the Arabian peninsula, water security, piracy, Ethiopia’s plan for a grand dam, access to water as a human right, and water and climate change.

Speakers included several Harvard faculty members, as well as presenters from other institutions, including two master teachers, Gretchen Roorbach and Scott Chelist, who presented a session on developing K-12 curricula.

“It’s been pretty spectacular,” said Marianne Marks, who teaches seventh-grade biology at Oak Hill Middle School in Newton. Marks said she talks about waterborne diseases in her class as a way to make discussions of microbes seem more real to students. It’s important for today’s students to understand the issues around water, she said, because theirs is the generation that will face the crisis more squarely.

“They’re going to be the ones to step up to the plate,” Marks said.

Roger Grande, who teaches history and social justice at Brookline High School, teaches a ninth-grade course that starts with river-based civilizations. He thought the workshop would provide material to enrich that course and allow him to use water as a connecting theme.

“I’ve heard a tremendous amount and thought about a lot of things,” Grande said.