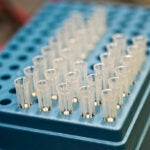 Patients with advanced chronic lymphocytic leukemia (CLL) often receive donor transplants that effectively “reboot” their own immune defenses, which then attack and potentially cure the hard-to-treat disease. However, these patients have a high rate of relapse, and the transplanted immune cells may also harm normal tissues, causing graft-versus-host disease (GVHD).

Now, scientists at Harvard-affiliated Dana-Farber Cancer Institute report in the Journal of Clinical Investigation that they observed a strong and selective immune response in some patients who received, shortly after the transplant, several doses of a “personalized” tumor vaccine composed of their own inactivated leukemia cells combined with an immune stimulant, granulocyte-macrophage colony-stimulating factor (GM-CSF). Thus the vaccine boosted the power of the transplanted immune system’s ability to attack the cancer — known as the graft-versus-leukemia (GvL) effect.

“Our studies suggest that autologous tumor cell vaccination is an effective strategy to advance long-term leukemia control” following transplants from donors, said senior author Catherine Wu,  a Harvard Medical School associate professsor of medicine. “Although this was a phase 1 study and not powered to look at questions of clinical efficacy, we did see promising clinical activity.”

There are few treatment options for advanced CLL. Standard transplants, which involve powerful doses of pre-transplant chemotherapy to wipe out as much of the leukemia as possible, have proven too toxic for older patients and those with co-existing diseases. Over the past decade, researchers have developed reduced-intensity conditioning (RIC) regimens, using lower chemotherapy doses that are more tolerable but rely entirely on the activity of the transplanted immune cells to battle the leukemia. Usually this is insufficient to keep the cancer at bay long-term and the disease progresses.

Furthermore, research has shown that the identifying antigens on the surface of CLL cells in individual patients may differ — that is, they have “personal tumor antigens,” the scientists said. “Based on these principles, vaccination with autologous irradiated leukemia cells” — the patient’s own stored leukemia cells — “is an attractive approach to expand leukemia-reactive T cells, since this vaccine formulation reliably includes personal tumor antigens.”

In the phase 1 trial, the vaccine was administered between 30 and 100 days after the transplant, with some patients receiving as many as six vaccine doses. The study enrolled 22 patients with advanced, aggressive CLL. Thirteen of the patients had evidence of the leukemia in their bone marrow at the time of transplant.

When examined six months post-transplant, the majority of patients showed evidence of clinical response: 10 had complete remissions and six had partial remissions; an additional patient had an early complete response but then relapsed at four months. After a median follow-up of 2.9 years, 13 patients (72 percent) had remained in continuous complete remission, one patient had stable disease, three patients developed progressive disease, and two of those patients died.

The results support the safety and biological activity of whole tumor-cell vaccination in hematological malignancies, said the authors, and giving the vaccine shortly after transplant may have been critical in its effectiveness. In addition, they said a key to the vaccine’s potency was the development by Dana-Farber scientists of GM-CSF-secreting “bystander” cells that can be used against lymphoid malignancies — which was not possible previously.

However, the authors noted that further randomized studies in larger patient groups will be necessary to determine if this strategy “will translate into a true clinical benefit for patients with advanced CLL.”

The first author of the report is Ute E. Burkhardt of Dana-Farber.