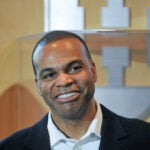 Tommy Amaker to be honored in D.C.

“We’re reading ‘The Wonderful Wizard of Oz,’ the original story, and they’re exploring and interpreting the story through the creative arts using a program called Pre-Texts,” she said, as the students ran outside. Having created masks and costumes inspired by the L. Frank Baum story, the children were seeking a real-world setting related to the chapter they were reading, as a way to deepen their connection with the characters and story.

The activity wasn’t just for fun, but was meant to help the students, for whom English is a second language, become stronger readers and English speakers. In addition, “Oz” is a fourth-grade-level text — well above the supposed reading level of Guilford’s second-graders.

Backed by the Boston Public Schools (BPS), Pre-Texts was developed by Doris Sommer, the Ira and Jewell Williams Professor of Romance Languages and Literatures and director of the Cultural Agents Initiative at Harvard. The program, now in its third year, has been a big success — this summer it was featured systemwide in programming for English-language learners [ELL], serving more than 1,000 students. In the fall, Pre-Texts will expand to 1,500 students in the BPS after-school program.

By encouraging wider creative exploration, Pre-Texts allows students a “level of ownership” with the text, and helps to animate the story, Guilford said.

“The interactive piece is very, very big,” she said. “That brings deeper comprehension, building a personal relationship to the text, understanding connections between characters, setting, and language, as well as establishing a common ground that is essential for ELL students.”

A student who combines reading with activities such as drawing, creating masks, improvising scenes, and even inventing new characters is engaging the intellect in a profound way, said Eileen de los Reyes, deputy superintendent of academics with Boston Public Schools.

As a result, students engage with the text on a deeper and more complex level, as they view the text through multiple points of view and dimensions.

“Students who participate in Pre-Texts are in a much better position to move forward. The magic of Pre-Texts is that it engages the reader with the text in a way that you don’t even realize how hard, and how deeply, you are thinking. It allows the reader to do heavy lifting, intellectually, and have great fun at the same time — and the children really respond to that.”

De los Reyes added that another benefit of the program is how others see the students as more-sophisticated readers, noticing their complex interpretations of the story. “It’s an amazing thing to see,” she said. “Teachers and family members see these students in a new light, because it seemed impossible that they could do this. But Pre-Texts is such a dynamic learning tool that it empowers the children to engage with the text, reconstruct it, and deconstruct it. It’s a real equalizer.”

De los Reyes noted that it was Sommer who first approached BPS with the idea of bringing Pre-Texts to local schools, adding that it’s “an example of the very powerful collaboration” between Boston schools and Harvard.

“She’s a very special intellectual,” de los Reyes said. “The modeling and the guidance for this project come directly from her, in a very hands-on kind of way. She’s been very persistent and very dedicated with it. She’s a true partner, and her love of the work, the program, and the children is very clear.”

For Sommer, the idea for Pre-Texts began in 2006, when in the course of leading a Cultural Agents summer program in Lima she encountered cartonera (cardboard) publishers, who create books out of recyclable materials. That a reader’s own creativity could deepen engagement with the text was a crucial revelation.

“I realized that the best way to teach was to use books as raw material for making other works of art,” Sommer said. “It made sense of all the literary fury and theory that I had been researching and teaching. Essentially, it’s borrowing other people’s words and recombining them to make your own art.”

In fact, Sommer argues, far from being a decorative or expressive tool, the act of creative exploration is fundamental to the program’s success, and that success needn’t have limits.

“As Harvard President Drew Faust has observed, art-making should be part of academic learning,” she said. “The reason that art is the vehicle for higher-order learning is because it’s a vehicle for exploration. What we’ve found is that when hardworking students of any level engage with Pre-Texts, it’s a brilliant exercise. Whether privileged or not, whether undereducated or not, every student flourishes in this program.”

In addition, Sommer said, Pre-Texts facilitates an appreciation for other points of view, helping to develop “sturdy, collaborative citizenship” in the classroom — an achievement that cannot help but have a ripple effect outside of it.

“When you generate admiration for others’ work, then it’s the variety and diversity that keeps you exploring,” she said. “It’s not tolerance: tolerance is just waiting for the other person to stop talking. But if you really, literally begin to appreciate and admire diversity, you begin to depend on one another to keep that variety alive.”

Ultimately, the proof of Pre-Texts’ effectiveness is in student performance, said de los Reyes. “You see the improvement of the students, the development of complex ideas, and the depth of engagement. It’s very obvious and clear.”

For Guilford, the program isn’t only a learning tool in the classroom, but also an example of “great pioneering” in education.

“It’s going to be around for quite a while.”