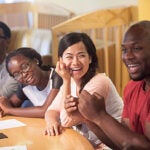 Elizabeth Gray, senior associate secretary to the University, has tended the Loeb House garden in Harvard Yard since 1985. “It began as a very small effort,” said Gray. “A row of potentilla was already in place alongside the holly hedge when I started adding annuals to extend the season of bloom. Then one perennial led to another.”

Taking inspiration from a visit to Cambridge, England, Gray described her plantings as “exuberant cottage-style garden,” that are “a little quirky and not too neat, with a season of bloom that starts with early spring crocus and runs until late October — including a big crimson splash of peonies around Commencement.”

As a walk-to-work Cambridge resident without a home garden of her own, Loeb House’s garden has been a constant learning opportunity for Gray and her colleagues who help maintain the space. “The site has its own challenges, from part sun to maple shade, each area supporting different plants. Harvard’s decision to compost allowed significant enrichment of the soil in recent years, and the flowers and shrubs have just taken off from there.”

Gray also finds satisfaction in the regulars who check in throughout the season to see what’s in bloom and compare gardening successes and failures with tourists who discover them by chance.

“People tell me they stop by on their way from work for a quick change of pace as they decompress from the day,” said Gray. “Many people find that spending time around flowers increases their own sense of balance and harmony. I know that is true for me.”