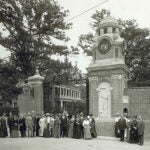 Harvard’s gates, on the screen

From day one, Le Corbusier knew his design goals for the Carpenter Center, his only North American building

Swiss-born designer Le Corbusier was sitting in his Paris studio on April 7, 1960. In front of him was a sheet of onionskin paper a yard wide and long. In rapid strokes, using crayon for color, he sketched a tentative plan for what was to become the Carpenter Center for the Visual Arts at Harvard. The strikingly modernist structure, which turned 50 this year, was Le Corbusier’s only building in North America and was the last major project of his life.

He colored the intersecting ovals of the main structure in red, the sinuous center ramp in mauve, and the pathways of nearby Sever Quadrangle in yellow, a shade he always used to denote areas for “circulation.” The 1960 sketch, wrote one scholar, showed that “from the beginning Le Corbusier violently asserts the independence of his building from its grid of surrounding streets and architecture.” For instance, the Carpenter Center was set at an angle on Quincy Street, defiantly askance from its neighbors.

In the same sketch Le Corbusier also used color to editorialize, to set his building apart from what was around it. He blocked out the neo-Georgian Harvard buildings around the site, then shaded them in dark brown. Le Corbusier was a painter, and that brown was not part of his visual toolbox. He favored bright, arresting colors.

Once the Carpenter Center was under construction, Le Corbusier established strict color guidelines for interior finishes. The oak paneling was brown but had to be light and fine-grained. Anything painted was almost always green, yellow, red, black, or white. Colors had to be applied directly to the concrete, without gradations or toning. In the original basement auditorium space, which doubled as a studio, the right wall was red, and the zigzag left wall was white, blue, and green. The beams were white, the ductwork was green (one detractor called it a “shrill” green), and a portion of the rear ceiling was yellow. In all, these were typical Le Corbusier colors, wrote one scholar, “which one also might associate with new tractors and machinery.”

The designer, who was also an early urbanist, imagined a coming era in which machines would ease life and nature would weave organically through the built environment. As for colors, it may have helped that Le Corbusier — who began his mornings with gymnastics and painting — for a time drove to his Paris studio in a pistachio-green Simca Fiat convertible.

The Carpenter Center’s color scheme remains subtle, despite Le Corbusier’s modernist painterly touches. He wanted the smooth finish of the concrete to dominate the interior, with touches of color intended to draw the eye to form and light. It calls to mind the designer in his conservative dark suit and signature bow tie.

Le Corbusier’s building plans were sometimes touched by exuberant hues and always color-coded — yellow for walkways, blue for glass in shade, red and orange for glass touched by the sun. But in the end, he preferred form to color. When pictures of his buildings and his paintings were displayed side by side, in fact, Le Corbusier did not mind if they were reproduced in black and white.