Seeds of violence in climate change 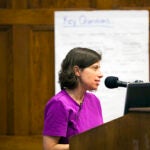 This is second in a series of stories about Harvard’s engagement in Latin America.

When Nathan Black considers the potential global consequences of climate change, one thing he sees is war.

Black, the French Environmental Fellow at the Harvard University Center for the Environment, is spending two years investigating the connection between changing agricultural conditions — specifically the supply of agricultural land — and civil war.

He is examining the cases of two nations, Haiti and Mexico, where shifts in the supply of agricultural land sparked violent conflict. He is also looking at Uruguay, which avoided conflict despite similar conditions in the late 1980s and early 1990s, to understand how violence was averted.

“What I’m looking at is, ‘What did Uruguay do that Haiti and Mexico failed to do?’” Black said. “What is the playbook?”

Black, who earned a bachelor’s degree from Rice University and a doctorate from the Massachusetts Institute of Technology, became interested in conflict as a field of study as an undergraduate, but focused on interstate conflict. When he entered MIT for his doctoral work, a colleague’s investigation of civil wars piqued his curiosity.

Far less has been written about civil conflict than clashing nations, he said, which leaves many interesting questions still to be answered. His doctoral dissertation was about developing civil conflicts spilling across borders. He also began thinking about his current topic, and in 2010 published an article on how changes in the supply of arable land can fuel civil war. Black was a pre-doctoral fellow at Harvard’s Belfer Center for Science and International Affairs before graduating from MIT in 2012.

“I think my own research suggests that on average, as arable land supplies decrease due to climate change, we should see more violent civil conflicts,” he said.

Kenneth Oye, an associate professor at MIT and director of its Center for International Studies, said Black’s work is unusual in that it not only examines a potential problem stemming from climate change, but also seeks practical approaches to resolve it.

“He’s an unusual guy because his commitment to tackling central issues that are of policy relevance has been with him from the beginning,” Oye said.

Climate is not a clear factor in the cases Black is studying, but lessons on the consequences of changes to the land supply — whatever the source — should still apply. In Haiti, poor agricultural practices degraded land, a situation exacerbated by corruption that diverted needed aid. In Mexico’s Chiapas region, government inaction on reform left land-poor peasants to watch elites buy up more land.

The rising temperatures and changing rainfall patterns expected by scientists in coming decades could accelerate desertification and take land that is currently used for agriculture — particularly in Africa and Latin America — out of production. Shifting precipitation patterns could also mean too much rain in some places, leading to crop failures.

The loss of livelihood from the land can prove ruinous for subsistence farmers and, by extension, the government, Black said. His studies of Haiti during the dictatorial reign of Jean-Claude Duvalier in the 1970s and 1980s showed that the degradation of agricultural land stemmed from widespread cutting of trees for firewood, coupled with a lack of improvements in irrigation and crop variety. The agricultural decline led to the migration of many young men with little money and fewer prospects to the cities, all too ready to join the unrest that followed Duvalier’s exit in 1986.

Black traveled to Haiti in January and interviewed two of Duvalier’s agriculture ministers, the current director of the land reform effort, and a group of peasant organizers. He also sought to interview Duvalier himself, who returned to Haiti in 2011 after 15 years in exile, but received no response.

Black is about halfway through his research, which he plans to publish in a book. Before that, though, he has work to complete in Chiapas, where land grabs by politically connected elites fed the Zapatista movement of the 1990s. The movement, which burst forth as an armed struggle in 1994 and was put down by the Mexican military, has since embraced nonviolent means of change.

Black has completed much of the background work on Uruguay and plans to visit this month to speak with two former presidents, Julio Sanguinetti, who served from 1985 until 1990 and again from 1995 until 2000, and Jorge Batlle Ibáñez, who served from 2000 to 2005. Also on his list are a former vice president and a former agriculture minister.

The problems in Uruguay in the 1970s and 1980s were somewhat different than those in Haiti and Mexico. Much of its population was already urbanized, so the danger was that agriculture-related shocks would send the economy into a tailspin, creating a pool of potential recruits for rebel groups.

The country’s agricultural economy is dominated by ranching, with beef its largest export. With the market flagging, leaders took two big steps to improve it, initiating reforms that began in the 1960s and stretched through the 1980s, Black said.

First, they invested in a vaccine for foot and mouth disease, which allowed the country to eradicate the disease in 1993 and again when it recurred in 2000. By eradicating foot and mouth, the nation’s beef exports gained or maintained access to U.S. and European markets, larger and with steadier demand than South American nations.

The second thing the government did was invest in seeds for better pasturage, which increased the number of cattle that could be grazed on an acre of land.

So far, Black said, the main lesson to emerge from his research is that governments should bypass quick fixes and instead invest in long-term improvements in the agriculture sector, making it more resilient.

“I hope the book will be a call to action to developing state governments and the developed nations that support them to make serious and sustained investment in the agriculture sector,” Black said. “You can’t just flip a switch and change agricultural technology.”