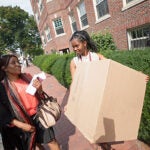 Lineup for the 103rd season includes the Great Alaska Shootout

Harvard men’s basketball head coach Tommy Amaker has released the team’s 2013-14 schedule, which features 12 games to be played at Lavietes Pavilion, a contest at TD Garden, and the program’s first trip to Alaska for the Carrs/Safeway Great Alaska Shootout.

“We are excited about the schedule we have put together for this coming year,” said Amaker. “Our nonconference schedule will provide us with many opportunities to improve as a team before beginning another competitive Ivy League campaign. We look forward to getting the season under way.”

Harvard will be in search of a fourth straight Ivy League title this season and a third straight trip to the NCAA Tournament. The Crimson went 20-10 last year, 11-3 in Ancient Eight play, before knocking off third-seeded New Mexico to reach the third round of March Madness. Harvard will also be vying for a fifth straight 20-win season, a feat that has never been accomplished in the Ivy League. The Crimson will face 15 opponents in 2013-14, which it played last year, going 16-5 in those contests with a 6-2 mark in nonconference action.

The 103rd season of Harvard basketball opens Nov. 10 against Holy Cross as part of a tripleheader at TD Garden. The event will also feature two other regional rivalries as Boston College takes on UMass, and Northeastern squares off with Boston University.

To read the full story and view the season’s schedule, visit the GoCrimson.com website. Tickets go on sale today (Aug. 27).