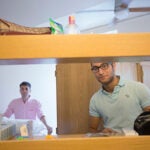 Professor spans centuries, from Bible to Woolf, in HDS talk

Removed from the frenzy of move-in day, and the buzz of Freshman Convocation — a relatively new, but increasingly popular part of the undergraduate experience — is the longstanding Harvard Divinity School (HDS) convocation service.

The ceremony seems an appropriate tradition for Harvard, founded in 1636 at the edge of a New England wilderness to educate Puritan ministers. (HDS was established in 1816 as the first nonsectarian theological institution in the United States.)

On Thursday afternoon the solemn tradition unfolded for the 198th time. Under a white tent behind Andover Hall, members of the School gathered to welcome a new academic year and to explore a sometimes overlooked yet vital part of the HDS experience: devotion.

Houghton Professor of the Practice of Ministry Studies Stephanie Paulsell delivered the ceremony’s keynote address, “Devotion in the Study of Religion.” She joked with the crowd that while some would immediately connect with her topic, others would likely complain, “devotion is not what I signed up for when I decided to come to Harvard.”

But Paulsell offered her listeners a nuanced approach to the subject, by way of two vastly different texts: The Bible’s “Song of Songs,” and an excerpt from Virginia Woolf’s “To the Lighthouse.”

Many consider the biblical poem — a dialogue between two lovers seeking to express in words their devotion to each other — “an oddity,” said Paulsell. But for her, the work, an excerpt from which was read early in the service, “is a fathomless pool of meaning.”

The best scholarship, ministry, and art are “marked by the unknowable more,” said Paulsell, a desire to delve the “limits of our knowing.”

The Harvard Divinity School Convocation featured a welcome from Dean David N. Hempton and an address by Houghton Professor of the Practice of Ministry Studies Stephanie Paulsell.

Woolf (1882-1941) deftly tapped those depths of devotion. The writer’s life, said Paulsell, was committed to exploring the “infinite possibilities furled in human beings and in human experience.”

In Woolf’s modernist and most autobiographical novel “To the Lighthouse,” the artist Lily Briscoe struggles to capture the image of a woman on canvas. “Fifty pairs of eyes were not enough to get round that one woman with,” read Paulsell from Woolf’s narrative.

“The unknowable more is Woolf’s great subject,” Paulsell added, “and her central artistic preoccupation. She sought new literary forms, which reflected what she called ‘the populist, undifferentiated chaos of life.’”

A common feeling in “Songs,” Woolf’s novels, and “hopefully your work and mine,” Paulsell told her listeners, is a devotion that cherishes and responds to the “unknowable more” of human experience with a sense of creativity, new perspectives, and new light.

Dean David N. Hempton opened the service with his trademark wit. “Welcome everyone on this beautiful, beautiful Irish day; soft rain, gray skies, the coolest day since July 20. This is perfection.”

With is closing remarks he thanked Paulsell for her inspiring address, for “the breadth of its embrace and the depth of its moral vision, as we have to face both our histories and our own times.”