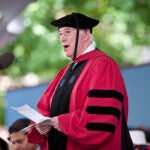 The Coolidge Professor of History and Professor of Economics Emeritus, Landes is arguably best-known for his book “The Wealth and Poverty of Nations,” a historical treatise that explored the ways in which history and culture intersected to create the conditions that allowed some nations to prosper while others languished in relative poverty. The book has been hailed as a landmark work by other historians and economists, including John Kenneth Galbraith, who called it “truly wonderful. No question that this will establish David Landes as preeminent in his field and in his time.”

Citing examples as varied as the role air conditioning played in the development of the American south, to how using chopsticks may have helped Asian workers gain the manual dexterity needed in microprocessor manufacture, to the role of eyeglasses in making precision tools possible, Landes was able to illustrate the modern history and economics of Western Europe and the Middle East in a unique and highly accessible way.

Among the Harvard faculty members who worked with Landes was Laurence A. Tisch Professor of History Niall Ferguson, who received a lengthy message from Landes regarding an upcoming book.

“I had just finished the first draft of my history of the Rothschilds,” Ferguson recalled. “I returned from holiday to find a 95-page fax from David Landes, who had been asked to act as a reader, but in fact took on the role of my unofficial editor.

“His comments were so brilliant, so insightful and so helpful that I was humbled,” he continued. “It was the beginning of a friendship, but I always considered myself first and foremost his apprentice-cum-disciple, always learning from a master of economic history — and of life. ‘Other people work to live,’ he liked to remind me. ‘We are lucky — we live to work.’ ”

Another Harvard faculty member who counted Landes among his role models was Alan Dershowitz, the Felix Frankfurter Professor of Law at Harvard Law School.

“David was a role model for me from my earliest days at Harvard — showing me that a Harvard professor could be a proud Jew and Zionist,” Dershowitz wrote. “It was an honor to know him and be a neighbor. I remember particularly his active involvement in the Harvard Jewish faculty lunch group and the perceptive and challenging questions he always posed. I will miss him.”

“What melancholy news,” said Leon Wieseltier, literary editor of the New Republic. “I remember David as one of the most interesting people I ever knew, and in so many ways unexpected: a traditionalist who kept inventing new subjects; an economic historian who taught everyone to study culture; a sophisticated man who liked to defend common sense.

“He had a naturally rigorous mind, which people sometimes mistook for a ferocity of personality,” Wieseltier added. “I don’t think I ever had a conversation with him that did not impart a new fact or refine an old opinion.”

After receiving his master’s degree, Landes was inducted into the U.S. Army, and assigned to the Signal Corps, which deployed him to guard and sentinel duty at the Army Japanese language school in Arlington, Va. While there, he met Edwin Reischauer, then an instructor at Harvard in Far Eastern languages.

Drawn by Landes’ personality, Reischauer selected Landes for the Signal Corps’ Japanese language school, where he worked as a cryptanalyst of Japanese codes. In May 1944, Landes received a field promotion to second lieutenant, as a cryptographic officer. In part, he deciphered Japanese messages concerning the nuclear bombs dropped on Japan. In 1945 and portions of 1946, he served in Hoechst, Germany, as a historical editor of German preparations for the defense of Normandy.

Following his honorable discharge in 1946, Landes returned to Harvard, where he studied under Professor Donald McKay, and received his Ph.D. in 1953. From 1950 to 1953, he was a junior fellow of the Society of Fellows at Columbia University, and was appointed an assistant professor at Columbia in 1952; he later served as an associate professor from 1955 to 1958.

From 1957 to 1958, Landes served as a fellow at the Center for Advanced Study in the Behavioral Sciences at Stanford University. He was then appointed a professor of history and economics at the University of California, Berkeley, a post he held until 1964.

In 1964, he joined the Harvard faculty as a professor of history and went on to various appointments in the fields of history, political science, and economics. From 1981 to 1993, he chaired the Committee on Degrees in Social Studies, and since 1987 he had been a senior fellow of the Society of Fellows.

In addition to his work as a Harvard faculty member, Landes in 1975 led a panel on Western European affairs for the Commission of Critical Choices for Americans, which was created by former New York Gov. Nelson A. Rockefeller. Landes also received five honorary degrees.

Landes was predeceased by his wife, Sonia. He is survived by his children, Jane, Richard and Alison, as well as eight grandchildren and nine great-grandchildren.

Landes wrote more than 50 articles, chapters, introductions, prefaces and forwards, and served as co-editor of a handful of other works. His best-known titles include “Bankers and Pashas: International Finance and Economic Imperialism in Egypt” (1958), a chapter in “The Cambridge Economic History of Europe, VI: The Industrial Revolution and After” (1965), “The Unbound Prometheus: Technological Change and Industrial Development in Western Europe from 1750 to the Present” (1969), “Revolution in Time: Clocks and the Making of the Modern World” (1983), “The Wealth and Poverty of Nations: Why Some Are So Rich and Some So Poor” (1998), “Dynasties: Fortunes and Misfortunes of the World’s Great Family Businesses” (2006). His published works have been translated into numerous foreign languages, including French, German, Italian, Spanish, Portuguese, Russian, Greek, Turkish, Arabic, Chinese, and Japanese.

At the time of his death, Landes was working on a number of projects, including a history of modern Israel, a study of latitude, and a historical fiction of modern Turkey. Those works will either remain incomplete or be published by his family at a website in his honor.