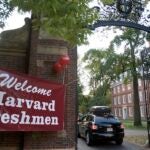 After a summer slumber, Harvard Yard began to come alive again as the Class of 2017 arrived on campus this morning.

Cars, vans, and trucks snaked through the Yard as freshmen, along with their parents and the occasional sibling, carried boxes, pulled suitcases, and lugged small appliances into dorm rooms. Teams of peer advisers wearing blue Superman T-shirts were quick to provide assistance.

There are more than 1,600 members in the class, hailing from nearly all 50 states and more than 80 countries. As the move-in progressed, you could find freshmen from around the world and around the corner.

“Today, I wish I were a freshman,” said Kyoko Kirby of Cambridge, who was helping her son Alex move into Grays Hall. “These kids are so fortunate to be here because only a few people in the entire world are able to experience what they are about to experience here at Harvard.”

“I am hearing from parents that they are nervous about leaving their kids behind, which is what you would expect on this day,” Pfister said. “But there is a lot of energy, and everyone is ready to get rolling. And I have heard from many students about experimentation with different classes, which is what we want to see.”

Outside of Grays Hall, Rebecca Ramos of Seattle was greeted by Faust and Pfister.

“It really says a lot of about the community here at Harvard to have the president and the dean of the College greeting students and their families on move-in day,” said Ramos, who was being helped by her mother, Donna. “This is all very exciting. I can’t wait to meet everyone and learn all that I can about Harvard.”

All moved in, this is surreal #HarvardMoveIn #harvard2017

In front of Matthews Hall, Jake Hummer was unloading a van with his parents. He said that coming to Cambridge from Reno, Nev., is quite an adjustment.

“To go from the desert to this thriving city is really awesome. I am really looking forward to meeting everyone and just being here in this thriving environment,” said Hummer. “It’s really quite different. I mean, this building is probably older than my state.”

Ezinne Nwankwo of Los Angeles was carrying a box down Harvard Street with her mother. Like many freshmen, Nwankwo said she was nervous initially, but was put at ease when she arrived at Pennypacker Hall.

“After meeting my roommates and all of these wonderful people here, I am a lot less nervous,” she said.

Thanks to the careful planning and work of staff and administrators, freshmen move-in was again a success.

“I am really pleased at how smoothly everything went,” Alex Kirby said.

Read more advice and share your own for Harvard’s incoming freshmen on Twitter using #Harvard2017. A Storify collection of images also captures  freshman move-in day. Join in the conversation via #HarvardMoveIn and #Harvard2017 on Twitter and Instagram.