A walk in Thoreau’s woods 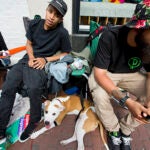 Opening in November, museum exhibition will replace popular one on color

When ordinary people talk of nature’s colors, they mention browns and oranges. When scientists do, they talk of melanins and carotenoids.

Since 2008, the two worlds have met at the Harvard Museum of Natural History (HMNH) in an exhibition that has been both instructive and attractive. “The Language of Color” uses some of nature’s most striking examples — brilliant toucans, hue-changing chameleons, and contrasting zebras — to explore how nature makes color and how animals use it to hide from predators, discourage rivals, and attract mates.

The exhibition, which staffers say has been one of the most popular with the public, has occupied the museum’s temporary exhibition gallery long past its original 2009 closing date.

After five years, though, the exhibition will close Oct. 7 to make way for a new display of author Henry David Thoreau’s Maine woods, featuring the photographs of Scot Miller. Miller is a nature photographer whose work has illustrated recent editions of two Thoreau books, “Walden: 150th Anniversary Illustrated Edition of the American Classic” and “Cape Cod: Illustrated Edition of the American Classic.”

The new exhibition will also include Thoreau-related specimens from the museum’s collections, such as his plant specimens from the Harvard Herbaria and his pencils from the Houghton Library. The opening, scheduled for mid-November, will be accompanied by a lecture series in the fall and spring. In April, a related exhibition will open at the Peabody Museum of Archaeology and Ethnology on Maine’s Penobscot people.

Jane Pickering, executive director of the Harvard Museums of Science and Culture, of which the HMNH is part, said that with 200,000 visitors to the museum each year, it’s likely that somewhere around a million people have walked through the color gallery. The exhibition has been particularly popular with teachers bringing their classes to visit, Pickering said, and with art students looking to nature for inspiration.

Jonathan Losos, the Monique and Philip Lehner Professor for the Study of Latin America and one of two faculty members whose work is featured in the color exhibition, said that once he saw how well the gallery came together — complete with the dewlaps of the anolis lizards he studies — he wasn’t surprised by its popularity.

“It’s spectacular,” Losos said. “I always enjoy walking in and looking at the beautiful graphics, but it’s also exciting to be making room for a new exhibit.”

Hopi Hoekstra, Alexander Agassiz Professor of Zoology, the other faculty member whose work is highlighted in the color gallery, said she regularly suggests that visitors take a walk through the gallery. One display highlights her research into the evolution and genetic roots of coat color in field mice, and much has changed since it was created.

That research, Hoekstra said, launched her lab, which has since tripled in size and branched into related areas. Now, researchers there are examining the genetic roots of animal behavior, along with continued studies on the evolution of coat color.

“We started with color because it’s the most direct connection to ecology,” Hoekstra said. “Measuring color is easy; measuring behavior is hard.”