A marker for breast cancer 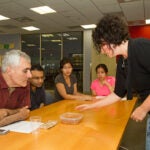 Research says it soon may be possible to gauge individual risk for disease, and eventually to treat it

An international scientific collaborative led by the Harvard Stem Cell Institute’s Kornelia Polyak has discovered why women who give birth in their early 20s are less likely to develop breast cancer eventually than women who don’t, triggering a search for a way to confer this protective state on all women.

The researchers are now testing p27, a mammary gland progenitor marker, on tissue samples collected from thousands of women over decades — women whose medical histories have been followed extremely closely — to see if it is an accurate breast cancer predictor in a large population. If the hypothesis is confirmed, which appears likely within a few months, Polyak says the commercial development of a clinical test for breast cancer risk would follow.

In a paper just published in the journal Cell Stem Cell, the researchers describe how a full-term pregnancy when a woman is in her early 20s reduces the relative number and proliferative capacity of mammary gland progenitors — cells that have the ability to divide into milk-producing cells — making them less likely to acquire mutations that lead to cancer.

“The reason we are excited about this research is that we can use a progenitor cell census to determine who’s at particularly high risk for breast cancer,” said Polyak, a Harvard Stem Cell Institute principal faculty member and a Harvard Medical School professor at the Dana-Farber Cancer Institute. “We could use this strategy to decrease cancer risk because we know what regulates the proliferation of these cells, and we could deplete them from the breast.”

Research shows that two trends are contributing to an increase in the number of breast cancer diagnoses, a rise in obesity and the ever-increasing number of women postponing childbearing. The scientists’ long-range goal is to develop a treatment that would mimic the protective effects of early childbearing.

The research, which took five years to complete, began with conversations between Polyak and Saraswati Sukumar, a professor at Johns Hopkins University School of Medicine. The two scientists formed collaborations with clinicians at cancer centers that see large numbers of high-risk women, in order to obtain breast tissue samples. They also worked with genomics experts and bioinformaticians to analyze gene expression in different breast cell types. At times, Polyak and Sukumar had trouble gaining cooperation for the study, which is unique in the breast cancer field for its focus on risk prediction and prevention.

“In general, people who study cancer always want to focus on treating the cancer. But, in reality, preventing cancer can have the biggest impact on cancer-associated morbidity and mortality,” Polyak said. “I think the mentality has to change because breast cancer affects so many women, and even though many of them are not dying of breast cancer, there’s a significant personal and societal burden.”