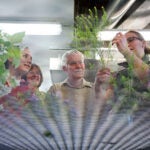 For decades, developing medicine to treat disease was a lengthy and often discouraging process: create a drug, test on a lab animal, hold a human clinical trial, and hope to calibrate an effective dose to kill the disease without devastating the patient.

Now, researchers at the Broad Institute of Harvard and the MIT are tapping the human genome mapped by its founders, hoping to create effective treatments for vexing afflictions.

“When you rely on biology — not models but real humans — to reveal the root cause of the disease, the good news is you can discover insights for even the most daunting ones, like schizophrenia,” said Stuart L. Schreiber, Ph.D. ’81, director of the year-old Center for the Science of Therapeutics.

Schreiber made his remarks Wednesday during a presentation on “The Road to Vital Therapy,” part of the Broad’s midsummer science lecture series. More than 500 people registered for the event, which focused on the institute’s efforts in what it called “chemistry-enabled, patient-based drug discovery.”

Schreiber, who is also Morris Loeb Professor of Chemistry and Chemical Biography at Harvard, said drug discovery over the past 40 years has been a “daunting” process that can take as long as 15 years, fail 90 percent of the time, and often miss its mark.

Rather than focusing on traditional experiments, Broad researchers look to biology and chemistry — what Schreiber called “experiments in nature.” One is underway on Crohn’s disease, a painful inflammatory bowel ailment that afflicts as many as 700,000 Americans; it is expected to yield fruitful results.

Broad researchers know that some Crohn’s genes are normal, some are not, and others protect against the disease. The institute’s goal is to find a drug therapy that fixes the gene that gives a person Crohn’s.

Schreiber said a remaining challenge is that the work identifying genetic targets is too advanced for the chemists devising medical therapies. The Crohn’s gene target “pocket” that would hold the medicine is three-dimensional, while most drugs are two. Broad scientists are working on a solution.

Genomic information isn’t a magic elixir, though. James E. Bradner ’94, associate director of the Center for Science of Therapeutics and an investigator at the Dana-Farber Cancer Institute, said that researchers thought when the human genome was sequenced, drugs could be made for each cancer-causing mutation.

It turns out that there are a million unique cancer mutations in 24,000 genes. Many are passenger mutations — those caused by “smoking, chewing tobacco, breathing air, or bad luck.” At least 480 contribute to cancer, while 149 are known to cause it, Bradner said.

Like Schreiber, Bradner believes that new drugs aimed at single genetic targets are the answer, when the technology to create them catches up.

“We need new technologies, multiple avenues of therapy targeting these” mutations, said Bradner, a physician-scientist who is also an assistant professor at Harvard Medical School. “One of the obstacles is we may not have the technology we need.”

Schreiber, speaking afterward, said he is hopeful that genomics and chemistry can be integrated to develop drugs to undermine stubborn diseases.

“I’m optimistic because there’s a blueprint, a roadmap to get there,” Schreiber said. “It’s not going to be easy, but it’s very different from 10 years ago, when you didn’t know how difficult or easy it would be when you didn’t have the roadmap. Now, we just need to keep a laser focus.”

The next lecture in the series, “Exploring the Genome’s ‘Dark Matter’: What the Frontiers of Genomic Research Are Revealing About Cancer,” is 6-7 p.m. July 17. It is free and open to the public.