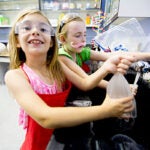 Opening a portal to summer

Swissbäkers’ completion recognized with ribbon cutting and words of appreciation

With the image of the Swiss Alps laminated on the windows of a former garage behind them, Boston Mayor Thomas M. Menino, Swissbäkers’ husband-and-wife team of Thomas and Helene Stohr, their sons Tobias and Nicolas, officials from Harvard University, and Swiss Consul General Felix Moesner joined a group of bakers to cut the ribbon on a new children’s playground and outdoor seating area at 168 Western Ave. in Allston.

The crisp slice of scissors on ribbon gave way to cheers, putting in place the final pieces of a project that has introduced an instantly popular business to Allston, brought 50 new jobs to the community, and enlivened Western Avenue.

“Small businesses are the backbone of the city and a key to what makes Boston’s neighborhoods work,” said Menino, who applauded Swissbäkers for bringing new jobs and contributing to the revitalization of the community. “Thanks to Thomas and Helene for having the courage to expand their business in Allston and thank you to Harvard for being a strong partner. When you work together, you can accomplish almost anything and here we have the city, Harvard University, neighbors, and a family-owned business working together.”

Swissbäkers was borne out of the Stohrs’ home kitchen as a baking and catering business. In 2006, the Stohrs opened their first store in a 400-square-foot space at the Reading train depot and within four years they were considering expanding. At that time, Harvard approached the couple as part of a focused effort to bring businesses to Harvard’s properties — businesses that would not just offer goods and services, but add verve to Western Avenue.

It was there, in the 14,000-square-foot former Volkswagen dealership, that the Stohrs saw their future bakery and café. Today, the space that Harvard sought to transform is a magnet for neighbors and a go-to destination for local businesses and organizations (such as the Swiss Consulate of Boston, which taps Swissbäkers catering weekly and has dubbed the business its official baker).

“We’ve only been here four months and already have so many regular guests,” said Helene Stohr.

“People want to connect and we want to make a difference; it’s not just about food and drinks, it’s about connecting and we’re glad to be part of the Allston community,” she said, adding, “and everyone likes to be hugged.”

“We at Harvard are appreciative of more hugging in Allston, so Helene and Thomas, thank you for that,” said Christine Heenan, vice president for public affairs and communications at Harvard, calling the couple enthusiastic partners from the first meeting with the University. Heenan also acknowledged Executive Vice President Katie Lapp, who spearheaded the effort to make better use of Harvard’s Allston properties.

“When Katie came to Harvard, she said we need to take every available vacant property in Allston and bring active, vibrant community uses in those spaces. Swissbäkers, Stone Hearth Pizza, and the i-lab are all a result of that effort,” Heenan said.

The Swissbäkers event was the latest in a string of ribbon cuttings in Allston, including the recent opening of the Charlesview Residences in Brighton Mills. Heenan also noted the new residential and retail commons slated for development at Barry’s Corner and the future science center on Western Avenue.

“With all the ribbon cuttings happening in Allston and Boston, we’ll need to invest in a scissor company,” she said.