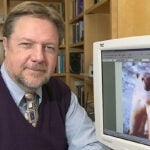 This afternoon President Obama honored the careers and contributions of the likes of “Star Wars” director George Lucas, musician Herb Alpert, writer Joan Didion, and Harvard’s own Robert Putnam, the Peter and Isabel Malkin Professor of Public Policy at the Kennedy School. Putnam was one of the recipients of the 2012 National Humanities Medal, which, along with the National Medal of Arts, was conferred by Obama.

The National Humanities Medal honors individuals or groups whose work has deepened the nation’s understanding of, broadened our citizens’ engagement with, or helped preserve and expand Americans’ access to important resources in the humanities.

“I’m very gratified to be included in such distinguished company, especially as a social scientist,” said Putnam. “Most of the credit is due to my remarkable students and research team over the years, who have worked with me to reaffirm the power of community.”

Putnam was honored for “deepening our understanding of community in America. Examining how patterns of engagement divide and unite, Dr. Putnam’s writing and research inspire us to improve institutions that make society worth living in, and his insights challenge us to be better citizens,” according to a statement by the White House Office of the Press Secretary.

Putnam teaches both undergraduate and graduate courses at Harvard and is a member of the National Academy of Sciences, a Fellow of the British Academy, and past president of the American Political Science Association. He has written 14 books, including the best-selling “Bowling Alone: The Collapse and Revival of American Community,” and more recently “Better Together: Restoring the American Community,” a study of promising new forms of social connectedness.

Former Harvard Overseer Jill Ker Conway also received the Humanities Medal “for her contributions as a historian and trailblazing academic leader. Dr. Conway has inspired generations of scholars, and her studies of exceptional and empowered women have revealed a common drive that unites women across the globe — to create, to lead, and to excel,” the White House said.

Laurie Olin, former chair of landscape architecture at the Harvard Graduate School of Design, accepted the 2012 National Medal of Arts for “his contributions as a preeminent landscape architect. Renowned for his acute sense of harmony and balance between nature and design, Mr. Olin has dedicated his energy to shaping many iconic spaces around the world and to educating new leaders in his art.”