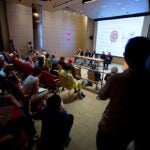 In their report published in Proceedings of the National Academy of Sciences (PNAS) Early Edition , the investigators describe using iPSCs — reprogrammed adult cells that have many of the characteristics of embryonic stem cells — both from healthy adults and from individuals with type 1 diabetes to generate blood vessels on the outer surface of the brain or under the skin of mice.

“The discovery of ways to bring mature cells back to a ‘stemlike’ state that can differentiate into many different types of tissue has brought enormous potential to the field of cell-based regenerative medicine, but the challenge of deriving functional cells from these iPSCs still remains,” says Rakesh Jain, Andrew Werk Cook Professor of Radiation Oncology (Tumor Biology) at Harvard Medical School (HMS), director of the Steele Laboratory for Tumor Biology at MGH, and co-senior author of the study. “Our team has developed an efficient method to generate vascular precursor cells from human iPSCs and used them to create networks of engineered blood vessels in living mice.”

The ability to regenerate or repair blood vessels could make a crucial difference in the treatment of cardiovascular disease — which continues to be the No. 1 cause of death in the U.S. — and other conditions resulting from blood vessel damage, such as the vascular complications of diabetes. In addition, providing a vascular supply to newly generated tissue remains one of the greatest barriers facing efforts to build solid organs through tissue engineering.

Several previous studies have generated from iPSCs the types of cells required to build blood vessels — endothelial cells that line vessels and connective tissue cells that provide structural support — but those cells could not form long-lasting vessels once introduced into animal models. “The biggest challenge we faced during the early phase of this project was establishing a reliable protocol to generate endothelial cell lines that produced great quantities of precursor cells that could generate strong, durable blood vessels,” says co-senior author Dai Fukumura, also of the Steele Laboratory and an associate professor of radiation oncology at HMS.

The MGH team adapted a method originally used to derive endothelial cells from human embryonic stem cells (hESCs). That method uses a single protein marker to identify vascular progenitors; in this study, the researchers sorted out iPSC-derived cells that expressed not only that protein but also two other protein markers of vascular potential. They then expanded that population using a culture system that team members had previously developed to differentiate endothelial cells from hESCs, and they confirmed that only iPSC-derived cells expressing all three markers generated endothelial cells with the full potential of forming blood vessels.

To test the capacity of those cells to generate functional blood vessels, they implanted onto the surface of the brains of mice a combination of the iPSC-derived endothelial precursor cells expressing the three markers and the mesenchymal precursors that generate essential structural cells. Within two weeks, the implanted cells had formed networks of blood-perfused vessels that appeared to function as well as adjacent natural vessels and continued to function for as long as 280 days in the living animals. Implantation of the combined precursor populations under the skin of mice also resulted in functional blood vessels but required implantation of five times more cells, and the vessels were short-lived, an observation consistent with the team’s previous studies of vessel generation in these two locations.

Because patients with type 1diabetes (T1D), which can damage blood vessels, could benefit from the ability to make new blood vessels, the researchers wanted to determine whether iPSCs derived from the cells of T1D patients could help generate functional blood vessels. As with cells from healthy individuals, precursors derived from T1D-iPSCs were able to generate functional, long-lasting blood vessels. However, the researchers note, different lines of the T1D-iPSCs — including different lines derived from the same patient — showed differences in cell-generating potential, indicating the need to better understand the underlying mechanisms.

“The potential applications of iPSC-generated blood vessels are broad — from repairing damaged vessels supplying the heart or brain to preventing the need to amputate limbs because of the vascular complication of diabetes,” says co-lead author Rekha Samuel, formerly of the Steele Laboratory and now at Christian Medical College, in Vellore, India. “But first we need to deal with such challenges as the variability of iPSC lines and the long-term safety issues involved in the use of these cells, which are being addressed by researchers around the world. We also need better ways of engineering the specific type of endothelial cell needed for specific organs and functions.”

Additional co-lead authors of the PNAS Early Edition report are Shan Liao and Trupti Vaedam, of the Steele Laboratory; and Laurence Daheron of the Harvard Stem Cell Institute (HSCI). Additional co-authors are Walid S. Kamoun, Ana Batista, Xiaoxing Han, Patrick Au, and Dan Duda, all of the Steele Laboratory; Christa Buecker and Richard Schäfer, of HSCI; and HMS Gerald and Darlene Jordan Professor of Medicine David Scadden of the MGH Center for Regenerative Medicine. Support for the study includes grants from the National Institutes of Health and HSCI.