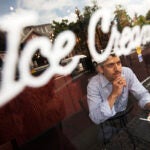 How many times have you thought you should switch out your old florescent light bulbs? Although LED lights are more energy-efficient, sometimes their higher cost causes people to avoid taking the next step to reduce their carbon footprint.

On Tuesday, the Science Center Plaza in front of the Harvard Farmers Market was buzzing with green-shirted staff members, displaying bright lights and power strips. It was a clever way for the Office of Sustainability to host its “lighting fair,” which offered members of the Harvard community energy-efficient bulbs at a fraction of their regular cost.

The fair, which partnered with Energy Star, NSTAR, and Mass Save, began as a Harvard real estate and housing sustainability program but evolved into a University-wide event, providing tools and resources to reduce energy use.

At the fair, staff, students, and faculty chose from a variety of $5 to $10 LED lights, chalking up discounts of about 90 percent. Eric Lloyd from TechniArt, an Energy Star partner, said that even at full price, “You’re saving money on your energy bill because you’re only paying pennies per light, and they last much longer” than traditional light bulbs.

Dan Blair from Campus Services purchased a box of energy-efficient lights for his apartment.

“Based on the University’s sustainability goals, I’ve gotten on board by using energy-efficient lighting, recycling more, and trying not to use my vehicle as much,” he said.

In line behind Blair was Bill McCallum from the Department of Stem Cell & Regenerative Biology,  who was on a mission. McCallum had already replaced nearly all the lights in his home with energy-efficient ones, but bought more at the fair to replace old bulbs in his parents’ home.

One of the men staffing the event was Marcio Fernandes from Next Step Living, who offered Cambridge homeowners free assessments from Mass Save to improve their energy efficiency.

“We’ll come check your heating systems, check for carbon monoxide, give you energy-efficient light bulbs and low-flow shower heads, change your thermostat, and even give you money for old refrigerators … for free,” said Fernandes.

The fair was part of a summer energy challenge, in which Harvard’s eight largest office buildings have been competing to complete eight sustainability tasks by Aug. 14, according to Olivia Percy from the Office of Sustainability. The buildings with the most participation will win an ice cream bash.