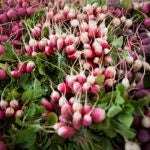 On a windswept Friday morning at the Arnold Arboretum, Pedro Reyes wandered through the lawns holding the hands of his two children. In Boston from his home base of Mexico City, Reyes, an internationally acclaimed artist, was awaiting the arrival of schoolchildren from the Spanish Heritage Academy, a Spanish language program of the Boston Public Schools.

Their agenda? Planting a tree — or in this case, a Japanese hydrangea — using a shovel made from the metal of surrendered firearms. This idea, “making life from death,” said Reyes, began in 2007, when Reyes organized Palas por Pistolas (Shovels for Guns), a campaign against gun violence in Mexico that called for the voluntary donations of weapons. The campaign netted 1,527 firearms, said Reyes, 40 percent of which were high-powered assault rifles.

“We took the guns to a foundry, melted them, then took that metal to a factory that produces hardware and we made 1,527 shovels,” he told the crowd of students, visitors, and Arboretum staffers who turned up for the event.

“We’ve selected a really charismatic plant,” said Michael Dosmann, the Arboretum’s curator of living collections. “We collected the hydrangea seeds from Japan in 2007, right around the time Pedro was starting his program, and now here we are in 2013.”

To date, said Reyes, more than 500 trees have been planted in 50 cities around the world, with more than a thousand trees to go (he is aiming to plant 1,527 trees, the exact number of guns donated). A few years ago, when the Mexican government heard of his idea, they donated even more metal from molten guns to Reyes, who transformed it into working musical instruments.

“It’s very exciting to be in a privileged collection like the Arnold Arboretum,” said Reyes, who called upon the Spanish Heritage Academy students to dig the hole housing the Arboretum’s latest plant. One by one, they each took turns.

“I was excited about digging because it’s an excellent time to plant another tree so we can have more oxygen and more beautiful trees,” commented student Diana Martinez.

Sponsored by Harvard’s Cultural Agents Initiative, the event was not the first to bring Reyes to Harvard. “Pedro was going to do an exhibit in 2007 at the Carpenter Center,” said Doris Sommer, Ira Jewell Williams Professor of Romance Languages and Literatures and director of the initiative. “He wanted to do something about the future, but he said the future seemed so bleak.”

“We talked for a while about cultural agents, people who help make social change through art,” recalled Sommer.

She saw a fix for his disillusionment and after his exhibit, Sommer employed Reyes in Harvard’s Pre-Texts program, a learning initiative that advocates using classic works of literature as an inspiration to make art in the classroom. Together, the two trained a legion of high school teachers in Mexico on the Pre-Texts methodology.

“The beauty of an artwork is that it can be used to bring people together, like we are together today,” said Reyes.