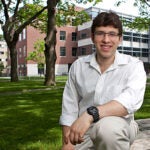 A globe-trotter, by design

Pfister’s career at Harvard spans nearly 40 years. He is an award-winning teacher, an influential scholar of plant and fungal biology, and a committed student advocate, most notably as master of Kirkland House for 18 years.

“Don’s deep engagement both with undergraduate education and with the learning communities of the Houses, combined with his outstanding leadership of the Summer School, make him uniquely well prepared to guide the College through this period of transition,” said Dean Michael D. Smith of the Faculty of Arts and Sciences (FAS). “I am deeply grateful to Don for agreeing to take yet another in a long line of important roles in the Faculty of Arts and Sciences.”

Pfister is also acting director of the Harvard University Herbaria and curator of the Farlow Reference Library and Herbarium.

“The College is filled with talented, energetic students who breathe so much life into this University, and I have always enjoyed engaging with them in and out of the classroom. Certainly in this new role, that will continue,” Pfister said. “I know the staff of the College is also talented and committed to meeting any challenge that arises. I look forward to working with all of them to continue to move the College forward in reaching its goals and fulfilling its mission.”

Pfister will serve as dean on an interim basis, taking over for Evelynn M. Hammonds, who completed her five-year term as dean at the beginning of the month. In the fall, Smith will launch a search for the new College dean. He will convene an advisory committee of faculty and will consult broadly with faculty, students, staff, and alumni.

“Evelynn has led the College with energy and commitment, and I thank her and wish her all the best as she returns to the faculty,” Smith said.

After starting his career at the University of Puerto Rico, Mayaguez, Pfister joined the Department of Biology at Harvard in 1974. His research centers on the biology and systematics of fungi. Using molecular, life history, and morphological methods, his laboratory strives to understand the relationships of fungi within certain groups and to uncover their diversity. In addition, Pfister studies the history of collections and collectors, and has published a bibliographic guide to the early literature on fungi.

Along with his research, Pfister’s excellence in teaching has been widely recognized over the years. He has taught courses in plant and fungal biology in settings ranging from freshman seminars at the College to courses in the Graduate School of Arts and Sciences. He also has taught in the Summer School and Extension School, and in 2004 was honored for 25 years of teaching at the Extension School.

In 2008, Pfister was appointed dean of the Summer School, bringing innovative courses to the program in Cambridge and supporting the creation of several new faculty-led study abroad programs. To help strengthen the summer community, he initiated faculty lunch tables in Annenberg Hall and a faculty orientation program.

That same year, Pfister received the William H. Weston Award for Teaching Excellence from the Mycological Society of America. He is also a former president of the society.

He has served on numerous FAS committees and has been a member of the Administrative Board for University Extension since 1998. From 1982 through 2000, Pfister and his wife, Cathleen, were masters of Kirkland House. As masters, the Pfisters became known for hosting pizza study breaks and dessert socials.

Pfister received his undergraduate degree in biology from Miami University (Ohio) and a Ph.D. from Cornell University.