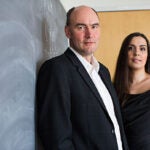 Researchers have long understood that genetics can play a role in susceptibility to cholera, but a team of Harvard scientists is now uncovering evidence of genetic changes that might also help protect some people from contracting the deadly disease.

Based on genetic data gathered from hundreds of people in Bangladesh, a research team made up of Harvard faculty and scientists from the Broad Institute and the Harvard-affiliated Massachusetts General Hospital (MGH) was able to identify a number of areas in the genome — some are responsible for certain immune system functions, others are connected to fluid loss — that appear to be related to cholera resistance. Later tests showed genetic differences between people who had contracted the disease and those who had been exposed, but never became ill. The results are described in a paper published this month in Science Translational Medicine.

“This study is exceptionally exciting for us because it shows the power of this approach,” said Pardis Sabeti, an associate professor of organismic and evolutionary biology and one of two senior co-authors of the paper. “This is the first time we’ve taken a genomic-wide approach to understanding cholera resistance. But it’s a first step, and there is a lot of exploration to go from here. For a disease that’s so ancient and widespread there’s very little that’s known about host immunity.”

The hope, Sabeti added, is that improved understanding of why some people appear to be immune will help efforts to develop vaccines and therapies, so that outbreaks like those of recent years in Haiti and Africa might someday be avoided.

“It is a very scary disease,” she said. “We now have treatments with oral rehydration therapy, but it is still devastating, and in extreme cases, cholera can kill in hours.”

“We also haven’t been able to develop a particularly effective vaccine,” added Elinor Karlsson, a post-doctoral fellow in organismic and evolutionary biology and the first author of the paper. “The vaccine that’s available wears off after a few years, whereas people who are exposed to the disease develop a long-lasting immunity… and nobody is quite sure why that is. This research is another way of tackling that problem, and it’s a way no one has come at it before.”

To understand the genetic differences between those with and without resistance, researchers first gathered genetic data on 42 family groups — called “trios” — that included a mother, father, and child. Using that data, researchers identified more than 300 areas of the genome that seemed to be under pressure due to natural selection, suggesting that genes in those regions might be adapting to deal with the threat of cholera.

“We found 305 areas — or about 2 percent of the genome — that appeared to be under selection,” Karlsson said. “That’s great, but unfortunately, all our tests can tell us is that a region is under selection, it doesn’t tell us why.”

Karlsson turned to a testing process called “gene set enrichment” to determine whether any particular groups of genes showed up in those regions more often than others.

“What’s interesting is that it shows what a huge pressure cholera has been on this population,” she added. “You could be selecting for anything in there — skin color, hair color, or even other diseases — but because cholera was a big enough force, we could pick it out just by doing this kind of testing.”

Armed with that data, researchers then performed a comparative study — examining the specific genetic regions in more than 100 patients who were sick with cholera and others who had been exposed to the disease, but had not become ill. The results, Karlsson said, showed differences between the two groups.

Going forward, researchers hope to conduct wider studies of the genetic differences between people who are susceptible and those who appear to be immune in the hope of identifying precisely which genes are involved, and the pathways involved in resistance.

“We have narrowed it down to a few genes, but the problem is that these are genes that people have not paid a great deal of attention to before,” Karlsson said. “There’s not a whole lot of description out there about them, so it’s hard to know which one might be the best candidate for study.”

In addition to potentially revealing a new pathway to understanding cholera resistance, the research highlights the potential power of using genetic data to study history.

Today, Sabeti said, between 5 and 10 percent of the Bangladeshi population is East Asian. While analyzing data for the paper, Karlsson was able to precisely pinpoint when the two populations first began to intermingle — in about A.D. 500.

“It’s a very interesting aspect of this work,” Karlsson said. “We’re genetics and genomics people, but if we can very precisely date these types of events — it would be invaluable to the work of historians and other disciplines.”