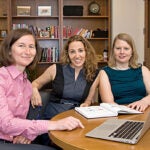 For decades, doctors have understood that microbes in the human gut can influence how certain drugs work in the body — by either activating or inactivating specific compounds — but questions have remained about exactly how the process works.

Harvard scientists are now beginning to provide those answers.

In a paper published July 19 in Science, Peter Turnbaugh, a Bauer Fellow at the Center for Systems Biology in the Faculty of Arts and Sciences (FAS), and Henry Haiser, a postdoctoral fellow, identify a pair of genes that appear to be responsible for allowing a specific strain of bacteria to break down a widely prescribed cardiac drug into an inactive compound, as well as a possible way to turn the process off.

“The traditional view of microbes in the gut relates to how they influence the digestion of our diet,” Turnbaugh said. “But we also know that there are over 40 different drugs that can be influenced by gut microbes. What’s really interesting is that although this has been known for decades, we still don’t really understand which microbes are involved or how they might be processing these compounds.”

To answer those questions, Turnbaugh and his colleagues chose to focus on digoxin, one of the oldest known cardiac glycosides. The medicine is typically prescribed to treat heart failure and cardiac arrhythmia.

“It’s one of the few drugs that, if you look in a pharmacology textbook, it will say that it’s inactivated by gut microbes,” Turnbaugh said. “John Lindenbaum’s group at Columbia showed that in the 1980s. They found that a single bacterial species, Eggerthella lenta, was responsible.”

Researchers in the earlier study also tried — but failed — to show that testing bacterial samples from a person’s gut could be used to predict whether the drug might be inactivated.

“To some degree the research was stalled there for a number of years, and the findings in our paper help to explain why,” Turnbaugh said. “Originally, it was hoped that we would simply be able to measure the amount of E. lenta in a person’s gut and predict whether the drug would be inactivated, but it’s more complicated than that.”

Beginning with lab-grown samples of E. lenta — some cultured in the presence of digoxin, some in its absence — Turnbaugh and Haiser tested to see if certain genes were activated by the presence of the drug.

“We identified two genes that were expressed at very low levels in the absence of the drug, but when you add the drug to the cultures … they come on really strong,” Turnbaugh said. “What’s encouraging about these two genes is that they both express what are called cytochromes — enzymes that are likely capable of converting digoxin to its inactive form.”

Though he warned that more genetic testing is needed before the results are definitive, Turnbaugh said other experiments support these initial findings.

The researchers found only a single strain of E. lenta — the only one that contained the two genes they had earlier identified — was capable of inactivating digoxin. In tests using human samples, bacterial communities that were able to inactivate the drug also showed high levels of these genes

“We were able to confirm that simply looking for the presence of E. lenta is not enough to predict which microbial communities inactivate digoxin,” Turnbaugh said. “We found detectable E. lenta colonization in all the human fecal samples we analyzed. But by testing the abundance of the identified genes we were able to reliably predict whether or not a given microbial community could metabolize the drug.”

In addition to being able to predict whether a given microbial community would inactivate the drug, Turnbaugh and colleagues identified a possible way to halt the process.

“It was previously shown that in the lab E. lenta grows on the amino acid arginine and that as you supply more and more arginine, you inhibit digoxin inactivation,” he said.

Tests conducted with mice showed that animals fed a diet high in protein, and thereby arginine, had higher levels of the drug in their blood than mice fed a zero-protein diet.

“We think that this could potentially be a way to tune microbial drug metabolism in the gut,” Turnbaugh said. “Our findings really emphasize the need to see if we can predict or prevent microbial drug inactivation in cardiac patients. If successful, it may be possible someday to recommend a certain diet, or to co-administer the drug with an inhibitor like arginine, ensuring a more reliable dosage.”