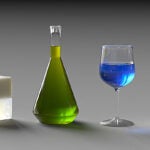 Envisioning a green space as inviting and social as it would be operative and effective, students Ecaterina Dobrescu and Rebecca Bartlett of the Harvard Graduate School of Design (GSD) set out last semester to transform a concrete patio space at Gund Hall into a modular system of vegetation and planters that could absorb and purify stormwater.

Funded by an Office for Sustainability student grant, “Stormwater Modules” seeks to test flexible design and the capacity of a small-scale system to reduce the quantity of stormwater runoff from rooftops to help improve water quality.

Stormwater management has long been employed across the country to collect rainwater and melted snow that runs off from streets, lawns, and buildings. As the rainwater flows off these surfaces and into rivers and streams, it picks up chemicals and other harmful pollutants. Traditional stormwater management often neglects the natural world’s steps of slow and timely absorption, purification, and replenishment. Increasingly, municipalities and building owners are seeking new and innovative strategies to collect stormwater runoff and purify it before it re-enters rivers and streams.

Inspired both by an independent study on the performance of stormwater management systems at Harvard and by an effort to design a green roof for the GSD, Dobrescu and Bartlett chose one of Gund Hall’s south-facing patios as their test site. Removing some of the individual pavers on the patio’s surface, they replaced the concrete slabs with moveable and interchangeable planters filled with various types of succulent plants. By replacing the traditional pavers with these nature-inspired modules, the project aims to reduce the quantity and speed of stormwater running off the building’s roof.

In addition to the rooftop planters, the students installed a test site for comparing the water that is collected and released on the unaltered patio with the water collected and released by the planters.  To test and study the absorbability of the plants, the students used hydrogel beads, a modern material designed to absorb water and slowly release it back into the atmosphere. In one Plexiglas box, the students placed only hydrogel beads, and in the other box they placed a layer of beads underneath one of their planters. As the beads expand and fill the boxes, the students will be able to compare rates and amounts of stormwater absorbed.

The hope, Dobrescu said, is that these planters provide a small-scale but practical and replicable solution to a substantial environmental challenge. “We hope that students and other green teams will take this modular system further, bringing it to other campus spaces with similar conditions. The system is designed to be moved, changed, and adapted.”

Dobrescu and Bartlett also built chairs and stools for the patio that added a social dynamic to the space while also functioning as stormwater modules. The seating was built out of recycled pallet wood from the GSD and can be rearranged easily according to students’ needs. The idea, Dobrescu said, was to create a greater draw for students, staff, and faculty to enjoy the outdoor spaces the GSD offers, raising the social quality of the building. “We’ve heard positive feedback from the students, and we’re excited that they’re embracing this redesigned space,” she said.

Dobrescu and Bartlett worked collaboratively with the GSD Green Team, Harvard’s Environmental Health and Services team, and GSD facilities manager Kevin Cahill. “Everyone was extremely helpful and enthusiastic. The success of this project is in large part due to Kevin’s openness to new ideas,” Dobrescu said. “We also greatly appreciated his aid in solving some of the technical difficulties.”

For Cahill, the success is seeing the research being done at the GSD turned into action. “It’s terrific to see the facilities be used as a laboratory for research, and it’s nice to see the research conducted in a social space rather than a gallery setting,” he said.

Dobrescu and Bartlett also credit the GSD and the student grant program. “In the last year, we’ve been challenged to think about sustainability in a new way,” Dobrescu said. “With new ideas being born at the GSD every day, we were pushed and inspired to come up with an innovative solution to a real-world, environmental problem. The student grant program allowed us to take our ideas a step further, and we’re excited to test and study the results of this project.”