A Harvard crossroads in summer 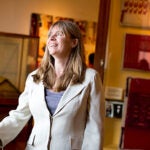 Jasmine Boussem and Jennifer Jones came to the redesigned plaza outside Harvard’s Science Center in search of smokers. “We’re not finding many,” Jones, a research assistant in the Department of Psychology, said with a laugh yesterday.

Jones and Boussem, a fellow researcher, made their way through the plaza’s minimalistic tables and wavy benches looking for candidates for a study on smoking habits, but the plaza crowd leaned more toward bicycles than cigarettes. Yet they did find themselves among other psychology researchers, drawn to the eclectic lunchtime mix of students, faculty, and tourists.

“It’s a natural place for people to congregate,” Boussem said, cradling a clipboard in her arms.

Part of Harvard’s Common Spaces program, the project to transform the former thoroughfare over Cambridge Street into a comfortable destination was completed in late spring. The result is a hard walking surface, metal tables and chairs, wooden benches, ginkgo and sumac trees, lighting and safety improvements, and a large tent that houses events such as farmers markets.

More enhancements are coming to the plaza as users return to it, including umbrellas for some of the tables, an ice-cream kiosk, and restoration of the Tanner Fountain, according to Lisa Hogarty, Harvard’s vice president for campus services.

The 35-year-old fountain in front of the Science Center is “definitely due for some significant restoration,” Hogarty said.  “We need to restore and fix all the inner plumbing and drainage systems and ultimately fix up the surface area.”

The appearance of the beloved rock fountain, however, will not change.

“It’s one of the most important water features we have on campus,” Hogarty said.

The Harvard community will have new games and activities to enjoy on the plaza this summer, including a life-size chessboard and live performances, Hogarty said.

Tuyet Cam, who will start her senior year as a Harvard psychology major this fall, said the project has been a success.

“If the motivation was to bring more people here, yeah, it is,” she said. She and two classmates manned a popular table in the shade of the Meyer Gate with a sign declaring: “Want candy? Want $10? Are you age 16-25? Participate in a quick, easy PSYCH STUDY.”

Arnoldo Gonzalez, a Harvard summer student, said he’s drawn to the plaza because it’s modern-looking and not “buggy.”

“It includes modernism and Harvard, where buildings are not usually new,” he said, waiting to play pingpong as an errant ball flew over his head.

Alison Howe, the department administrator at Harvard’s Department of East Asian Languages and Civilization, visited the refurbished plaza for the first time yesterday to enjoy a vegan sandwich.

“I absolutely love it,” said Howe, who hadn’t liked it previously. Like many lunchtime diners, she said the healthier options at the nearby food trucks drew her to the site.

The Whole Foods Market Streetside Chefs food truck has seen a steady stream of mealtime customers since it started working out of the plaza two months ago, manager Felipe Ribeiro said.

“We’ve had a lot of repeat customers,” he said, as his coworker Chris Graham explained to a customer what a halloumi sandwich was.

Ribeiro estimated that 70 percent of the food truck’s customers are affiliated with Harvard, while 30 percent are tourists or Cambridge residents. Considering the international crowd that Harvard attracts, he said it helps that he speaks Portuguese and Spanish and Graham knows French.

The schedule for the food trucks and events at the Plaza can be found on the Common Spaces website.