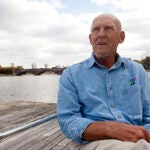 Coach for the ages

FAS-based observatory to be a center for language study

It is estimated that by 2050 the United States will be home to more 130 million Hispanics, making it the largest Spanish-speaking nation on the planet.

But as the language continues to expand, questions will arise. How has Spanish been altered by its interaction with the American linguistic melting pot? How will it sound in a decade? Five decades?

Those subjects — and others — will be among the central issues addressed by the newly created Instituto Cervantes Observatory of the Spanish Language and Hispanic Cultures in the United States at the Faculty of Arts and Sciences of Harvard University.

Established though a memorandum of understanding signed recently by Harvard President Drew Faust, Dean of Arts and Humanities Diana Sorensen, and Instituto Cervantes Director Víctor García de la Concha, the observatory is intended as an international hub for the study of how the Spanish language has progressed in the United States.

“This agreement will place Harvard and the Instituto Cervantes at the forefront of Spanish language scholarship,” Faust said. “The observatory it creates will serve as a magnet for exceptional scholars from all over the world interested in studying how language evolves over time, as well as through expansion into new areas and interaction with other cultures. I look forward to the insights and understanding that will emerge from this collaboration.”

Sorensen, who is also the James F. Rothenberg Professor of Romance Languages and Literatures and of Comparative Literature, echoed Faust’s comments.

“I am excited to be a part of this collaboration, and for the intellectual and educational opportunities it represents,” Sorensen said. “It has long been recognized that language and culture are deeply intertwined. The creation of the observatory will allow us not only to explore those connections, but to ask important new questions about the Spanish language and culture, and how both are changed and enriched by their expansion and interaction with the growing Hispanic communities in the United States.”

“Instituto Cervantes feels very proud about this collaboration with Harvard University because it is an excellent opportunity for proposing joint projects and activities related to the Spanish language and all forms of Hispanic cultures,” said Luis Prados Covarrubias, Instituto Cervantes chief of staff. “We are very interested in the creation of an Observatory of the Spanish Language and Hispanic Culture in the United States because the future of that language around the world will be deeply linked to its future in North America.

“Instituto Cervantes and Harvard University are very conscious that the Spanish language is not only the communicative tool for the Hispanic community, but also a language of excellence and prestige for any kind of communicative purposes,” he continued. “On behalf of the Instituto Cervantes, I would like to expresses my gratitude to the Faculty of Arts and Humanities, especially to Dean Diana Sorensen, as well as for the unconditional support received from Banco Santander.”

The observatory will annually host a variety of cultural initiatives, conferences, and lectures, and will include the participation of Cervantes Prize winners and Latino writers living in the United States.

“We look forward to collaborating on pedagogical and research projects, both domestic and international, that touch on the widest range of topics relating to the transmission and practice of Spanish language and culture. There is no doubt that this initiative — and the presence of the observatory at Harvard — will greatly enhance our educational initiatives in many domains.”

The observatory will be based at Harvard, and headed by Francisco Moreno, professor at the University of Alcala and former director of Cervantes Institutes in Sao Paulo, Brazil, and Chicago. It will be managed through FAS’s Division of Arts and Humanities, but will work with a number of other Harvard groups, including the Polinsky Language Sciences Lab, the Department of Romance Languages and Literatures, the David Rockefeller Center for Latin American Studies, and the Standing Committee on Ethnicity, Migration, Rights. Among the proposed projects are analyses of the Spanish and Latino populations in the 2010 U.S. Census, a study of Spanish teaching in the United States, and the creation of two visiting professorships.