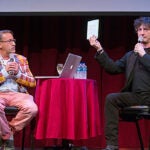 Gaiman as a guide

On many warm summer nights in Central Park’s outdoor Delacorte Theater, lyrical lines from William Shakespeare drift above the occasional quack of a duck or hum of a passing plane. The Public Theater presents the beloved, free “Shakespeare in the Park” series.

But on Monday evening, snippets from the Bard were accompanied by something else: a spirited public debate led by a Harvard University professor with the searching question, “What are we worth?”

A selection of readings from Shakespeare’s plays, touching on topics such as money and morals, was followed by an open-air forum with Michael Sandel, the Anne T. and Robert M. Bass Professor of Government. His latest book, “What Money Can’t Buy: The Moral Limit of Markets,” examines the repercussions of the trend toward putting a price tag on just about everything, from palatial yachts to political influence.

Sandel, a master at getting people talking, used the same approach he takes with his popular Harvard course “Justice,” asking audience members to defend their positions on tough ethical questions. Unsurprisingly, the opinionated New Yorkers proved they were up to the challenge, quickly and emphatically weighing in on his first moral quandary: Should people be legally allowed to buy and sell human kidneys?

One member of the audience said he favored the practice as long as it was highly regulated. But another feared that such a system would exploit the poor, capitalizing on their desperation for money and turning them into “walking organs” for sale.

“The argument is that against background conditions of poverty and inequality, desperate poverty, the choice, the freedom of choice, that typically recommends the use of markets may not be present,” said Sandel. “The exchange may not really be free; it may be the poverty consenting, not the will.”

Earlier in the evening, veteran actress Vanessa Redgrave gave voice to the dilemma, reading from a scene from “Romeo and Juliet” as the apothecary who sells the brokenhearted lover his illegal poison. Said Redgrave, in the words of the impoverished and conflicted druggist, “My poverty, but not my will, consents.”

“If people are desperately poor,” said Sandel, “consent may not be all that free.”

The program was sponsored by the theater’s Public Forum, a series of lectures, conversations, and performances with leading voices in the arts, media, and politics, directed by Jeremy McCarter, and by the Aspen Institute Arts Program, directed by Damian Woetzel.

McCarter, Harvard Class of ’98, said his best College courses, in particular those of Sandel’s, including “Justice,” which he’d sit in on as a freshman every chance that he could, “planted some seeds that are now growing.”

“There’s a continuum between a great lecture/debate and a play that provokes some idea about the world,” he said. “The Public Forum program … produces the theater of ideas, which tries to combine the best of both of those things.”

And no one is better than the Bard, McCarter said, at illuminating contemporary, pressing moral questions. “One of the reasons why these plays have endured is precisely because they frame the questions that continue to matter today.”

During the first half of the program, 10 stars of theater and film took to the stage to deliver a selection of readings. Raúl Esparza performed a soliloquy from “King John” in the role of Philip Faulconbridge, the illegitimate son of King Richard the Lionhearted, who carefully observes the devious dealings among the powerbrokers of England and France. As a newcomer to the court, said McCarter, who introduced the evening’s readings, Faulconbridge sees “how commodity, pure self-interest, is at play.”

“He that wins of all, of kings, of beggars,” said Esparza, “… that smooth-faced gentleman, tickling Commodity, Commodity, the bias of the world.”

Gazing at a gold coin in her hand, Christine Baranski delivered the searing line “This yellow slave will knit and break religions,” as the titular character from “Timon of Athens,” about a wealthy man who loses his fortune and his friends.

Later, Sandel focused on education, raising the controversial question of whether teachers and parents should reward children with money for good grades or the number of books they read.

The battle lines were clear, and equally divided. Some in the audience argued that money as incentive to get children reading could jumpstart their enthusiasm for books. Others, including one psychiatrist, argued that children’s interest in books and intrinsic motivation to read for its own sake “would be undermined.”

While both were powerful arguments, Sandel said, they shared the sense that “the motivation matters,” as well as the importance of the lessons learned and “the attitudes cultivated toward learning.”

“Still, we now see an example, at least of the possibility,” he added, “that sometimes — the inequality argument aside — introducing money or a cash incentive may corrupt, or undermine, or crowd out attitudes and values and norms, in this case the intrinsic love of reading.”

Matt Damon, another of Sandel’s former students, took a hilarious turn during the evening as a gum-chewing suitor of Portia in “The Merchant of Venice.” Actress Lily Rabe as Portia had to struggle to keep a straight face. Damon later joined Sandel on stage to wade into dangerous territory in the middle of New York City: a discussion about baseball and the Boston Red Sox.

Sandel, who grew up a Minnesota Twins fan, recalled how in the past baseball was a more egalitarian experience for fans. Mailroom clerks and CEOs sat side by side, stood in the same long lines for the bathroom, munched on the same “soggy hot dogs,” and when it rained, said Sandel, “Everybody got wet.”

“It was exactly that way at Fenway,” agreed Damon. But today, the type of ticket you buy, he lamented, dictates the experience.  “It segregates the population along economic lines, and you lose the commonality of the experience.”

Sandel called that “the skyboxification” of American values, and he doesn’t like it. The commodification of nearly everything corrodes “commonality itself,” the foundation of community, and “the sense that we are all in this together.” He said that also can erode the essence of democracy.

Part of the solution, Sandel argued, involves public debates and discussions about how to value goods and social practices.

Before the presentation, Tennessee resident Steven Shelton waited patiently in the theater’s standby line, hoping for a ticket. Although he’d never heard of Sandel, Shelton, who has gone cashless in the past year, working for barter and trade instead of a paycheck, said the notion of whether there is a moral limit to capitalism “struck a chord with me.”

Later, after getting a seat, Shelton said he agreed with Sandel’s “skyboxification” theory.

“[We need] more discussions and more commonality, like he was talking about. Getting everybody into the bleacher seats instead of having people in the skybox, that makes a big difference.”