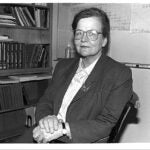 Rolla Milton Tryon Jr., Professor of Biology and curator of ferns in the Gray Herbarium, an authority on the taxonomy and geography of ferns and fern allies, died the 20th of August of 2001, six days before his 85th birthday.

Tryon spent his life studying the Pteridophyta, ferns and fern allies. This group of vascular plants represents an early evolutionary branch in the land plants. They once dominated the vegetation of the planet, and their fossilized remains gave rise of much of the carbon deposits of the world. Outside of horticultural and ornamental importance ferns largely hold a place as organisms of interest in understanding the history of terrestrial vegetation and in understand the earth over time and space.

He was born on August 26, 1916, in Chicago, where his father was a professor of American history and education at the University of Chicago. An A.A. degree in 1935 was followed by a B.S. in 1937, both from the University of Chicago. These were followed in quick succession by a Ph.M. from the University of Wisconsin in 1938, and an M.S. in 1940 and Ph.D. in 1941, both from Harvard. At Harvard he studied under the direction of Professor M. L. Fernald and Mr. Charles A. Weatherby at the Gray Herbarium. To say that Tryon spent his life studying ferns is perhaps an understatement. His first scientific paper, published in 1934 when he was 18 years old was on ferns that he had observed around his family’s summer cottage near the dunes in Chesterton, Indiana.

As was the case with most of the Harvard botanists, he brought his botanical training to the war effort during WWII as a lab technician in the U. S. Chemical Warfare Service at the Massachusetts Institute of Technology. It is said that his father suggested a second Ph.D. in chemistry – this in order to earn a living.

He served briefly as an instructor at Dartmouth College and then at the University of Wisconsin. In 1945 he became an assistant professor at the University of Wisconsin. Here he met Alice Faber, who was his student and then his wife. Together they studied ferns; their interest in all aspects of ferns was limitless and extended to all aspects of their professional and private lives. Ferns were everywhere indoors, on the wall, and in the garden. From 1947 to 1957 Tryon was an associate professor of Botany at Washington University in Saint Louis and assistant curator in the herbarium of the Missouri Botanical Garden. There, the Tryons organized a symposium dedicated to topics in plant sciences; it became a yearly event that continues today.

In 1957 the Tryons traveled to Peru and initiated a study of the rich fern flora of that country. With this Tryon began research on the fern flora of the American tropics and that interest would last the rest of his life. Of particular interest were the tree ferns and on this topic Tryon published extensively throughout his career. Following a year at the University of California Herbarium at Berkeley as a research associate, he was appointed, in 1958, Curator of Ferns at the Gray Herbarium at Harvard. There he remained until after his retirement in 1987. In 1972 he was appointed professor of biology in the Biology Department under the committee on Organismic and Evolutionary Biology and through that appointment he supervised several graduate students who were to become the leaders of the next generation of pteridologists.

Tryon is recognized for his taxonomic research, particularly on American and tropical species of ferns. Best known are his book Ferns and Allied Plants: with Special Reference to Tropical America, coauthored with Alice F. Tryon (published in 1982) and his work on the ferns of Peru, Pteridophyta of Peru, completed in retirement and consisting of 28 contributions in 6 parts and 837 pages. Early books on the ferns of Minnesota and Wisconsin were standard works for regional floristic studies. He demonstrated in all of his work precision, encyclopedic knowledge of the world’s fern flora, and a firm grounding in botanical nomenclature in the tradition of his Harvard mentor Charles Weatherby.

The deep evolutionary questions of fern relationships led him to the study of plant geography – how ferns in particular where distributed in space and time. He taught a course in biogeography and his last paper was on fern migration routes and the assemblage of the present day flora of the Serra Ricardo Franco in Brazil.

Following his retirement from Harvard he became an adjunct professor at the University of South Florida in Tampa, where he continued work on ferns with his wife, Alice.