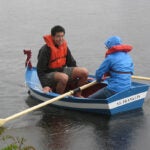 A range of fresh food in Cambridge and Allston

Shielded by a tent at Science Center Plaza, Harvard employees Paula Gaughan and Susan Courtney stood in front of a near-endless selection of pastas, trying to choose just one.

“This happens every time,” Gaughan said, laughing as she looked over Valicenti Organico’s selection. “You stand here debating all the options, and then you realize five minutes have passed.”

On the other side of the tent, Carolyn Manning of C&C Lobster confirmed that the coolers at her feet did, in fact, contain live crustaceans.

“You can pick one up, take it home, and cook it,” said Manning, who is at the market for the third year running, adding that a few students had already come by to do just that.

With its bright flowers and colorful produce, the Farmers’ Market at Harvard is one of the University’s sights of summer, and one of two Harvard-sponsored markets that bring out diverse and enthusiastic crowds of all ages.

Now in its ninth year, the market features more than 20 local and regional vendors who come to Cambridge to sell their fresh produce, meats, sweets, and flowers. It runs from noon to 6 p.m. Tuesdays through Oct. 29.

The Harvard Allston Farmers’ Market opens this week as well, running from 3 to 7 p.m. on Fridays.  The six-year-old market has moved from the Harvard Allston Education Portal to the parking lot of Swiss Bakers at 168 Western Ave. Like its Cambridge counterpart, the Allston market boasts a range of fresh produce and specialty foods, and features the Boston seafood favorite Red’s Best.  Both markets regularly host live music, special events, and other surprise offerings.

During the Cambridge market’s opening day, new vendor Sarah-Beth Chester of 7ate9 Bakery, a business that specializes in cheesecakes, noted its special features.

“Farmers markets are great, and this is the only one I go to that has seating,” she said, gesturing to the café tables and benches lining the plaza. “It’s fantastic that you can buy something and immediately just sit down and enjoy it.”

The Allston market’s new location ensures freshly baked Swiss goods will be part of the fare and the ambience.  Swiss Bakers café will be open to those seeking a cool indoor space for treats and snacks.

Louisa Denison, who helps to coordinate the Cambridge market through Harvard University Dining Services, said one of its most enjoyable features was how it represented multiple communities.

“That sense of community is something that’s very much welcomed at Harvard,” she said. “There are so many products of New England here, from honeys to meats and a wealth of produce, and that gives students a sense of what lies beyond Harvard and even Cambridge.”

With the new plaza space, coordinators plan to extend community programming, including story time with by city librarians and workshops on skills such as knife sharpening and filleting.

As the cloudy skies began to clear Monday, Manning smiled as new groups of staff, faculty, and students approached.

“It’s so nice to be back, and the new location is great,” she said. “It’s really pretty out here, so hopefully people will come out and enjoy the market. “