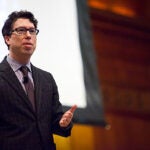 Database of molecules a big opportunity for solar cell researchers

Scientists hoping to make the next breakthrough in renewable energy now have plenty of new avenues to explore — Harvard researchers this week released a database of more than 2 million molecules that might be useful in the construction of organic solar cells for the production of renewable energy.

Developed as part of the Materials Genome Initiative launched by the White House’s Office of Science and Technology Policy, the goal of the database is to provide researchers with a starting point for work aimed at increasing the efficiency of a solar energy technology that is cheap and easy to produce.

“One of the problems with organic solar cells is, right now, there are only a handful of molecules that are in the same league with silicon in terms of efficiency,” said Alán Aspuru-Guzik, a professor of chemistry and chemical biology. “This is really a guide for experimentalists. What we’re doing is democratizing access to this type of data in the same way that the biologists did with the Human Genome Project.

“In many ways, biology is far ahead of chemistry in these efforts,” he added. “You can find the genome of a frog online, or the genome of a worm, but you cannot do that for the quantum properties of molecular materials. This database will provide access to the ‘secret sauce’ of these materials, so people can explore innovative new ideas.”

The data was generated by the Harvard Clean Energy Project in partnership with IBM and the research group of Professor Zhenan Bao at Stanford University. It uses supercomputing power provided by a network of thousands of volunteer donors around the world.

The importance of the project was clear: Contrasted with their silicon-based cousins, organic solar cells are far cheaper and easier to produce — some can even be printed in a process similar to that used by inkjet printers. The lightweight cells can also be molded into virtually any shape, and can be rolled up and easily transported.

Those characteristics, Aspuru-Guzik said, point toward a major possibility for the cells as a cheap power source for the more than 2 billion people worldwide without access to electricity.

“If you want to install solar cells on a building, you need them to last 20 or 30 years,” he said. “But the real market for this technology is someone in the Third World — to have a cheap and portable source of energy that you can connect to a battery — that’s a big deal.”

To create the database, Harvard researchers first worked with scientists at Stanford to define a new class of molecules based on 26 basic fragments that could be combined in more than 3 million arrangements, said Johannes Hachmann, a research associate in Harvard’s Department of Chemistry and Chemical Biology.

The World Community Grid, a project founded by IBM that uses distributed volunteer computing (spare computer time donated by thousands of participants around the world), was tapped to help characterize each possibility.

“Of the 3.1 million candidates, we have now characterized about 2.3 million, meaning we have electronic structure data for them,” Hachmann said. “We can plug that data into models which predict how well each molecule would work for solar cell applications. Based on those results we rank the potential of each molecule — those rankings are part of what we released.”

“One has to take our ranking of materials as one would take that of candidate compounds for pharmaceutical applications,” Aspuru-Guzik said. “The ranking is not foolproof but rather a guide to interesting families of molecular patterns to explore. We look at it in a statistical sense and point out enriched and depleted fragments that are interesting targets for experimentalists to try.”

In addition to identifying individual molecules with promise for solar applications, the database will allow scientists to understand whether the most promising molecules share chemical or structural similarities that allow them to act as better semiconductors.

Going forward, Aspuru-Guzik said, he plans to expand the website — molecularspace.org — to act as a clearinghouse for data from his and other groups that might be used to develop materials for other applications, including flow batteries for large-scale grid-energy storage and organic transistors.

“For all practical intents, there are an infinite number of molecules that chemists can make,” Hachmann said. “By comparison, the number that we have characterized is fairly tiny. In materials science, it takes a graduate student roughly one year to come up with a new molecule and synthesize it. As a result, people typically try to improve things they’re familiar with, or tweak things that already work reasonably well. As a consequence, the development is very incremental.

“The idea of this big-data approach is that we can very quickly screen new compounds on the computer, and hopefully find new chemical domains or structural motifs which are successful for particular applications,” he continued. “I like to use the example of nanotubes — they were discovered by accident, but they have revolutionized how we think about materials science. That’s one of our goals with this project: to point to a new class of molecules or compounds which are going to be successful.”