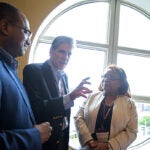 In an effort to get his students to make slow, careful observations of organisms in the field and the lab, Gonzalo Giribet has a secret weapon — the pencil.

As part of Giribet’s “Biology of Invertebrates” class, students spend hours in the lab studying dozens of animals, and making closely observed, highly detailed sketches of each. The idea, said Giribet, the Alexander Agassiz Professor of Zoology, is to encourage students to rely on illustration as an observational technique that is as powerful as, and sometimes more reliable than, photography.

“In zoology, scientific illustration is very important,” he said. “It allows you to highlight every aspect of an organism, some of which may be more difficult to discern from a photograph. If you’ve spent hours drawing a butterfly, when you’re done, you’ll know for sure that it has two pairs of wings, you’ll know how the posterior and anterior wings are arranged, you’ll know what the antennae look like. That’s the idea behind this class.”

Though Giribet has taught the class for a number of years, the emphasis on observation through illustration was introduced last year by doctoral student Christopher Laumer.

“Gonzalo gave me more or less creative control over the lab section of the course, so for three hours every week we’d look at a diversity of adult body plans,” Laumer said. “My idea was to model the class after the invertebrate zoology class I took just before I came to Harvard, at Friday Harbor Laboratories on the Washington coast.”

Laumer stressed that the class was more about encouraging students’ observational skills than nurturing their artistic abilities.

“One thing about invertebrates is you have to become comfortable making open-ended observations of their morphology, and illustration is a good route to that because to make an illustration, even for someone who isn’t artistic, you have to look very closely at the animal,” he said. “It’s a different mental exercise than taking a photograph.”

While talent isn’t a prerequisite to make the illustrations, “many of the students were naturals at it,” Laumer said.

“I was extremely impressed with the quality of their observations,” he said. “It was deeply satisfying to see them progress over the course of the term.”

The skills developed during lab hours were put to good use during a trip to Panama. Students spent hours snorkeling on shallow reefs to collect specimens for class, which was held at a local lab, and observed dozens of animals in their natural habitat.

“That field work is one of the most important components of the course,” Giribet said. “The students not only get the theory in the classroom, but we then go to the lab and they have the opportunity to see the animals and dissect them, and to see them in situ on the reef.

“For many students, it’s a whole new experience,” he added. “Some of them may have never been in the ocean, or never been to a tropical location. It complements a lot of the things we do in the classroom with the chance to experience invertebrate zoology done in the field. Every year, I hear from students who tell me this is the best class they’ve ever taken.”