Hyman to lead Society for Neuroscience 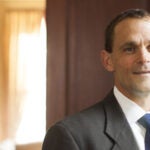 Incoming HGSE dean on his passion for education

Steven E. Hyman, former provost and Distinguished Service Professor of Stem Cell and Regenerative Biology at Harvard, has been named president-elect of the Society for Neuroscience, the world’s largest organization of brain and nervous system scientists and physicians, effective at the 2013 annual meeting to be held this fall in San Diego.

A 1980 graduate of Harvard Medical School, Hyman pursued basic neurobiological research, focusing on drug addiction and the molecular origins of mental illness. By 1994, he became the first faculty director of Harvard University’s Mind/Brain/Behavior Initiative, a multidisciplinary effort to study how nervous system disease relates to human behavior. Shortly thereafter, the director of the National Institutes of Health recruited Hyman to lead the National Institute of Mental Health (NIMH). But in 2001, Hyman left the NIMH to become the University’s provost, a position he held until 2011.

A faculty member of the Harvard Stem Cell Institute, and director of the Stanley Center for Psychiatric Research at the Broad Institute of Harvard and MIT, Hyman’s career has been a rare combination of neuroscience and academic leadership.

Hyman will assume the presidency at the 2014 annual meeting.