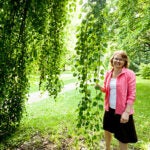 The climb of her life

Famed actors, scholars, politicians, and musicians are among the many luminaries who have joined Harvard President Drew Faust on the Sanders Theatre stage. “But I have never been in better company,” Faust told an enthusiastic crowd on Thursday as she introduced Harvard’s 2013 Harvard Heroes, including a speedy cafeteria checker, a revolutionary library cataloger, a development rockstar, and a digital pioneer.

The festive ceremony celebrates the accomplishments of men and women from across the University, unsung contributors who are nominated by their peers for their exceptional efforts and service to Harvard. The honorees form an eclectic and selective group; they represent only one-half of 1 percent of the Harvard staff, and are recognized for a range of criteria, including the ability to adapt to change, foster a culture of diversity and inclusion, lead, innovate, and demonstrate caring for others.

“Thank you, Harvard Heroes, for your dedication to supporting and advancing the University’s mission of teaching and research. Each of you is committed to personal excellence and collective success, giving your best effort week after week, year after year, and — for some of you — decade after decade,” said Faust.

Members of the Harvard community, friends, and families filled the hall to hoot and holler, clap and cheer for the 60 honorees whose talents and accomplishments are as diverse as the Harvard Schools and departments they represent.

Timothy Collins, a maintenance technician at Harvard Medical School, keeps the campus’s low- and high-pressure boilers running smoothly, and also helps his colleagues “let off steam” by leading them in jiujitsu classes. In her role as communications manager at the Harvard Graduate School of Design, Meghan Sandberg helps to produce and distribute Harvard Design Magazine and is always “eager to help others,” said Faust. Custodial crew chief Michel Montimer “finishes tasks in a flash,” noted Faust, as part of his work for Harvard Campus Services.

It’s the second season that the 18-year-old program has been University-wide but the first time it has honored those who help keep Harvard green. Ten women and men from across Harvard also were recognized for their efforts to improve Harvard’s environmental sustainability.

“The incorporation of Green Heroes into the Harvard Heroes program is an exciting step forward in further embedding sustainability throughout the University,” said Heather Henriksen, director of the Harvard Office for Sustainability. “This new partnership with HR leaders is also a natural fit because our Green Heroes demonstrate many of the core attributes of a Harvard Hero in the way they act as environmental leaders in their workplace by strengthening community, promoting One Harvard collaboration, and inspiring others to innovate and act for change to benefit the University’s mission.”

As a Green Hero, Jen Doleva, endowment, gift, and chart of accounts administrator, saved paper and money at the Harvard School of Public Health, encouraging her colleagues to compost, recycle, and take the stairs. “It isn’t easy being green,” Faust said, “but you make it easier.” Another Green Hero, Michael Goodwin, assistant director of operations at the Harvard Graduate School of Education, helped to introduce local foods at the Gutman Library café and partnered with the School’s Green Team to launch a composting program.

Gail Collmann Griffin flexes her green thumb as the director of gardens and grounds at Harvard’s Dumbarton Oaks, helping it to flourish and making one of the University’s most “breathtaking resources” more accessible and sustainable, said Faust.

One hero was deemed an MVP for keeping members of the Harvard community moving, literally. “You are … a clutch contributor season after season,” said Faust of Patricia Henry, senior associate director of athletics, who works closely with Harvard’s varsity teams and intramural and recreational programs.

Some heroes braved the elements to get their jobs done. Gale-force winds didn’t stop Paraison Francois, building services assistant at the Radcliffe Institute for Advanced Study, when it came to keeping some of the University’s buildings in shape. Faust called his arrival at work during last year’s Hurricane Sandy and blizzard Nemo “a testament to your diligence and dedication.” In the words of his nominator, read Faust, “It is people like [you] who really make Radcliffe and Harvard a great place to work.”

Harvard Executive Vice President Katie Lapp opened the event and introduced a brief video tribute honoring another group of Harvard Heroes, members of the University community who made “innumerable contributions” during the Boston Marathon bombings and the days that followed. We were moved, said Lapp, “by the many acts of bravery and generosity in the face of fear.”

What makes the event so special, say its organizers, is the opportunity if affords Harvard staff members to honor their peers. The fact that the number of nominees doubled from last year, said Mary Ann O’Brien, director of planning and program management for Harvard Human Resources, is a sign of the recognition program’s broad appeal.

“It’s a chance for Harvard employees to call out the accomplishments of their co-workers, especially when that contribution may not be easily visible to managers,” said O’Brien. As Harvard becomes less decentralized and more interdependent, she added, “People really need to rely on each other to get work done, and they really appreciate it when co-workers go above and beyond to collaborate, support them, provide great service, and make everyday work easier.”

Attendees enjoyed live music and summery treats such as watermelon, gazpacho, and macaroni and cheese at a post-ceremony reception in Annenberg Hall. Amid a rush of warm wishes and hugs from family and friends, Bridget Duffy, honored for her work as an administrative coordinator in Harvard’s Faculty of Arts and Sciences, reflected on the importance of the event.

“You are seeing a lot of people who are behind the scenes, doing things like being more green, or supporting people, not just doing the work, but doing the work well and caring about the community and the University as a whole.”

The comments of Marilyn Hausammann, Harvard’s vice president for human resources, during the ceremony echoed those sentiments. “It is my hope that all of you, family members, friends, colleagues, managers, University leaders,” Hausammann said, “will be as inspired as we are to work beside these folks in Harvard’s world-changing mission.”

“I am just grateful,” Duffy said of her award. “I love Harvard, and I am just really grateful to be here every day.”