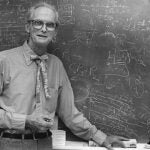 Heinrich “Dick” Holland was born in Germany, but in 1939 conditions there led him to emigrate to the United States. Here he graduated from the Stony Brook School on Long Island. Dick then attended Princeton University, where he graduated in chemistry within three years at the age of 18. He continued graduate studies at Columbia University, and at age 23 joined the faculty of Princeton University. It did not take much time for his fame to spread and he came to Harvard University in 1972, where he became the Harry C. Dudley Professor of Economic Geology.

Dick Holland was one of the founding fathers of the geochemistry of hydrothermal ore deposits as he pioneered the use of thermochemical calculations to deduce the temperature and chemical composition of ore-forming fluids from observed mineral assemblages. This made it possible to obtain reliable estimates of the temperature, pressure, and fugacities of sulfur, oxygen, carbon dioxide, and other components. In addition, with his students he investigated experimentally important questions about the formation of hydrothermal ore deposits. This included the high-temperature partitioning of elements between hydrous fluids and silicate melts as well as the interaction of hot water with rocks. These pioneering experiments also clarified the formation of porphyry copper deposits and of volcanogenic massive sulfide deposits.

Dick’s pioneering work on solubilities, on stability relations, and on redox equilibria between fluids and minerals led to a better understanding of the transport and deposition of minerals in ore deposits. Furthermore, his studies of the oxidation of uraninite clarified the formation of Witwatersrand-type Au-U deposits and of the oxygen content of the Precambrian atmosphere.

In addition to being a great theoretician and experimentalist, Dick Holland carried out important analytical studies, such as the first detailed fluid inclusion and stable isotope studies at Providencia, Mexico, and Bluebell, British Columbia. His belief that fluid inclusions could furnish important information about the chemical composition of hydrothermal fluids led him to develop ways to analyze their metal contents and gaseous chemistry.

Dick examined how elements were dispersed and concentrated to form ore deposits and contributed significantly to our general understanding of the formation of porphyry copper, vein and replacement lead-zinc-silver, hydrothermal uranium, and evaposite deposits. His studies of volcanogenic massive sulfide (kuroko-type) ores complemented his interest in black smokers on ocean ridges and the oceanic magnesium budget. Furthermore, his work on iron formations, conglomerate uranium deposits, and metalliferous black shales had implications for the composition of the Precambrian atmosphere.

Dick Holland was a perceptive, passionate, and interdisciplinary scientist. Typically, his mind envisaged what needed to be done to test a new idea. He raised questions concerning what field observations needed to be made, what samples needed to be taken (and how), what laboratory analyses or experiments should to be done, how many alternative interpretations there could be, and how the available data could discriminate between them. Dick stood out from his colleagues because of his clear thinking about complex geological/geochemical problems and for his emphasis on the overall view.

Dick’s insistence on collecting field evidence was illustrated during a study of hydrothermal uranium deposits in northern Saskatchewan, where he insisted on collecting so many samples that the amphibious airplane could not lift off until the pilot rebelled and took him back to the pier in order to send the samples by land.

Dick Holland published 146 papers and authored, co-authored, or co-edited seven books, attesting to his productivity. In recognition of his accomplishments he became a member of the National and American Academies of Sciences and received the V. M. Goldschmidt Award of the Geochemical Society.

It is important to note Dick Holland’s talent as a teacher and mentor to undergraduate, graduate, and post-doctoral students. They praised him for his patience, dedication, generosity with time and equipment, helpfulness, openness, and willingness to listen. His characteristic expressions were “What’s new?”, “Are you sure of that?”, “Who cares?”, and “Onward.” Dick was a genial, challenging, sage, and jolly colleague, whose laughter often spread from his office down the hall. His broad interests were not just scientific, but covered history and literature, particularly rare books. Most importantly, he was a warm and caring person, a great and loyal friend, and a loving and dedicated family man.

Dick was predeceased by his wife, Alice, and his son, Matthew. He is survived by his sons John and Henry as well as by his daughter, Anne.