Gaiman as a guide 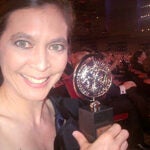 Diane Paulus, on her big night

Author Neil Gaiman has received multiple honors for his stories, books, and comics, including several Hugo Awards, the Newbery Medal, and the Carnegie Medal. But until his 2012 address to the graduating class of the University of the Arts in Philadelphia, he’d never delivered a commencement speech.

“I had no idea how to give a speech to a bunch of graduating artists,” said Gaiman, who never attended college. He decided that he would “write down everything I wish I had known, when I’d started, that could possibly help.”

The speech went viral, garnering thousands of views and tweets — so many, in fact, that publishing houses expressed an interest in producing a book of the speech.

The book, “Make Good Art,” posed a challenge for its designer, Chip Kidd: how to make a visual and tangible record of Gaiman’s speech compelling when the speech was already freely available online.

Gaiman and Kidd met on the Oberon stage June 5 to discuss the inspiration behind the speech, the process of creating the book, and challenges and opportunities for artists today. The talk was sponsored by the Boston Book Festival.

In his approach to the speech, Kidd said, he recalled his days as a student in graphic design at Penn State.

“It was like I was in typography 101,” said Kidd, whose design résumé includes titles by Michael Crichton, Elmore Leonard, Haruki Murakami, and John Updike. His interpretation of Gaiman’s speech employs no images. Instead, the design solely draws upon the creativity and inventiveness of the text.

“It was interesting to really examine what Neil was telling you, and trying to figure out how to reflect that visually on the page,” Kidd said. “The text had to be something that you looked at, as well as something that you read.”

Kidd drew upon the concept of concrete poetry, which arranges words and letters creatively to contribute to the symbolism and power of the language. As a result, the book’s text is sometimes inverted, occasionally upside down, and even overlapping, depending on the content.

One of the key reviewers of the speech, Gaiman said, was his wife, Amanda Palmer, an artist, musician, and songwriter. Palmer advised him to cut anything “that was the kind of thing people said” in commencement addresses.

“I didn’t know what people said in commencement speeches, because I’d never seen one except hers,” Gaiman said, referring to Palmer’s speech to the New England Institute of the Arts in 2011. “But she told me what parts to take out, and I did.”

A Q-and-A session touched on Gaiman’s new novel, “The Ocean at the End of the Lane,” his scripts for the BBC’s “Doctor Who,” and a six-part miniseries of his “Sandman” comic.

One of the most interesting discoveries in his years of writing, Gaiman said, was that no matter the story, the response he received from initial readers was one to trust.

“When people tell you how to fix something, they’re always wrong,” he said. “But when they tell you something doesn’t work for them — a storyline confuses them, or they want you to bring a character back — they’re always right.”

His readers’ notes in hand, he sets the story aside for a period of time. Returning, he prints a fresh copy, and reads it “as if I’ve never read it before,” scribbling his thoughts in the margins.

Gaiman added that his work as a journalist helped him to write clearly under deadline pressure. A recent glance back at some of his earliest work, at 18 and 19, was an “eye-opener.”

“If anyone again ever comes up to me and asks, ‘Do you think I could make it as a professional writer?’ The answer is, ‘Yeah.’ Because it was just terrible, and I thought I was brilliant,” Gaiman said, prompting a roar of laughter from the audience. “I was lucky enough that I kept writing long enough to become good.”