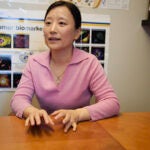 New insights into the causes of our raging obesity epidemic are coming from an unusual source: locusts.

Australian scientist Stephen Simpson’s years of research into the insects’ swarming behavior have led him step by step from physiology to nutritional needs to a wider investigation of animal nutrition and, finally, to the human diet.

Simpson’s work highlights the importance of protein as a regulator of diet and how an animal on a calorie-rich but protein-poor diet will overeat until it gets the protein it needs.

On Tuesday at Harvard’s Geological Lecture Hall, Simpson, who in 2012 was named academic head of Sydney University’s Charles Perkins Centre (which focuses on fighting obesity, diabetes, and cardiovascular disease), described his path to discovery. The event, “Law of the Locusts: What Insect Swarms Teach Us about Cannibalism, Aging, and Human Obesity,” was sponsored by the Harvard Museum of Natural History, one of the Harvard Museums of Science and Culture.

Simpson began his research trying to understand why and how an ordinary grasshopper morphs into a locust, changing from a camouflaged, solitary animal into a social, aggressive, strikingly black-and-yellow member of an insect swarm.

Early work showed that population density triggered the behavioral and physical changes. When populations of the grasshoppers — gathering because they’d been attracted by a food source — reached a critical threshold, they switched from being shy and avoiding contact to being social and swarming.

Then came an examination of the organization of swarms, and the finding that though the behavior is coordinated, the swarms contain no leaders. Instead, swarm behavior is driven by that of the individual reacting to nearby conditions. The major force among those local conditions is proximity to neighbors, because, it turns out, locusts are afraid of cannibalism.

That work provided insight into swarms’ hunt for protein. And the largest protein source in a Mormon cricket swarm is the individual cricket. This explains not only their occasional cannibalism, but also the regimented behavior of the swarm, with the insects lining up a particular distance from one another and keeping a safe distance from hungry companions while marching or flying.

A closer examination of the locust diet showed that the insects will seek out a balanced ratio of carbohydrates and protein. However, protein — critical in reproduction — is the most important driver.

When locusts were kept on diets high in carbohydrates but low in protein, they would overeat until they got their ideal protein level. That was not the case, however, when they were put on a protein-rich diet low in carbohydrates. Then, the animals would overeat, but would stop before they reached the ideal carbohydrate level, probably because of the potential toxicity of large amounts of protein byproducts. That meant that the animals lost weight on the high-protein diet, which provides insight into the effectiveness of the Atkins and other high-protein fad diets, Simpson said. An examination of other herbivores and omnivores — carnivores did not fit the mold — showed that mice, fish, birds, and one other important species followed that trend.

“We found that same pattern in a whole range of other animals,” Simpson said. “The other omnivore we found it in was us.”

An examination of the long-term effects of these diets showed the problems with staying on a high-protein diet for long periods of time, Simpson said. While diets rich in protein are ideal for reproductive success — egg-laying in insects — they also shorten lifespan.