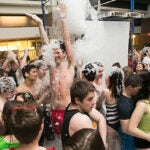 The sudsiest night of the year

Putting problem sets, papers, studying, and exams behind them, a small group of Harvard students brought together by Professor Melissa Franklin built their own boat, going from raw materials to finished product in just five days and then launching the vessel on the Charles River.

“It didn’t sink,” said Franklin, the Mallinckrodt Professor of Physics, with a laugh. “Getting that tiny boat out on the water was more fun than they expected because it was something they built themselves. I think every American at some point in their lives wants to build a boat and float down the Mississippi or drift away someplace.”

Franklin said the idea behind the project was to give students an atypical Harvard experience, and to explore the possibility of expanding the exercise into a class.

“I had this idea that every student at Harvard should build something with their hands because there just aren’t a lot of opportunities to do that here. These students had never held a jigsaw before they started this project,” said Franklin, who is also chair of the Physics Department. “I can imagine a course where you build a boat from a set of plans, and then move on to maybe designing a boat and using advanced tools. Part of the idea of doing projects is to allow the students to learn through their hands, and for me, to use pedagogy like a glue gun and squeeze it out in the right places.”

For Phillip Yao, a recent graduate of the College who is preparing to continue his studies at the University of Oxford on a Rhodes Scholarship, the challenge was unique — and rewarding.

“I have never built anything like this before, so it really has been an interesting experience for me,” said Yao, a physics concentrator. “At first, it seems like we were just creating these random pieces and I wasn’t really sure how they were going to all fit together. But it’s been really cool to see it all come together.”

Yao’s roommate and fellow ’13 grad Nolan Pollock said the project demanded high concentration and thinking — and fixing — on the fly.

“You really have to pay attention to detail because you have pieces with delicate angles and your cuts have to be precise. And when they’re not, you have to problem-solve, which really taught me a lot.”

The other students on the project were Jessica Rucinski, who will graduate from the College in December, Piotr Galuszka ’14, and Laura Jeanty, who just received her Ph.D. in physics.

Working with designs provided by California-based Stevenson Projects, the students started with a sheet of plywood that had to be cut, bent, and shaped. They sanded, assembled, sealed the seams, and primed and painted. The boat was named S.S. Franklin in honor of their teacher.

“When you make something from scratch it really makes you appreciate all of the work and the quality of materials that goes into it. It really makes me realize how difficult it is to get quality, hand-crafted products now,” said Jeanty. “And this has been great because it has been a week when you’re not in front of the computer.”

Getting into the tiny boat was not easy, and adjustments had to be made so the students wouldn’t hit their legs when they pulled the oars. But its maiden voyage was a successful one.

“I really do think this idea has the potential to go places,” Franklin said.