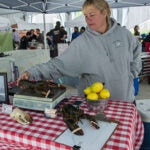 Police, Securitas honored for their roles in response to marathon bombings

Members of the Harvard University Police Department and the Securitas protective service were honored for their brave and selfless work during the Boston Marathon bombings and subsequent manhunt during a ceremony on Monday afternoon.

Deputy Chief Kevin Regan was the master of ceremonies for the event at the Charles Hotel, which was packed with about 100 HUPD employees and their family members. Bob Iuliano, general counsel for the University and the co-host of the ceremony, recalled U.S. Attorney General Robert Kennedy, who “spent much of his time thinking about law enforcement issues and said, ‘Every community gets the law enforcement it insists upon.’” Kennedy was right, joked Iuliano, since “As a graduate of Harvard College, of course, he has to be.”

“Harvard has been wise in insisting on the kind of law enforcement we have here today,” Iuliano said. And although the day was meant to honor the actions of the police and Securitas personnel during the crisis, he took a moment to thank the officers for what they do every day, from guiding bewildered freshmen to guarding visiting public officials to protecting Harvard students, faculty, and staff who occasionally find themselves in trouble. The police department handles its job “with a sensitivity and grace that is appreciated every day.”

Iuliano introduced Harvard President Drew Faust, who graciously thanked the officers and their families. Faust went off her scripted remarks, and told a candid story about learning to play the piano when she was 4 years old (“the height of my musical career,” she said with good humor). She said the only song she’s ever written was titled “The Kind Policeman.” Growing up on a farm, she had never seen a policeman, but she thought that time might have anticipated the kindness that the HUPD demonstrates daily to the students at Harvard.

The civilian Chief’s Exemplary Performance Award was presented to Brian Reardon of Securitas, who serves as security manager at Harvard’s Faculty of Arts & Sciences (FAS). Noting the multiple shifts Reardon worked through on the night of the firefight with the alleged bombers in Watertown, Regan joked, “Are you still working?” He said HUPD recognizes the security personnel’s importance and honors their exemplary performance.

Officers Christopher Riccardi and Officer Peter McGaffigan then received the Medal of Merit. Both officers aided in the search for the marathon bombing suspects, putting themselves in harm’s way and bringing credit to HUPD.

The Medal of Valor was presented in closing to officers Ryan Stanton and Michael Rea. The officers “demonstrated outstanding courage and valor” in the face of danger by exposing themselves to gunfire in order to administer first aid to wounded MBTA officer Dick Donahue, ultimately saving his life.

When the medals were presented, all of the officers received hoots, whistles, and standing ovations. These officers, said Regan, are all a reflection of HUPD.