A goodbye and hello 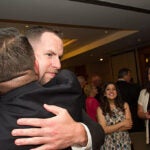 Since 1981, Robert Healy has served as the city manager of Cambridge. But this fall, the retiring official will bring his decades of experience to Harvard as a distinguished fellow at the Harvard Kennedy School’s Taubman Center for State and Local Government.

Elected officials, Harvard leaders, and community members turned out at Loeb House on Tuesday to celebrate Healy’s achievements and years of service. Harvard President Drew Faust said that his dedication and vision helped to propel the city of Cambridge to become the state’s top city in which to live, according to the Boston Globe’s Dreamtown Finder ratings.

‪“Bob Healy has spent much of his impressive career bringing people with good ideas together and creating environments in which those ideas could take root and flourish,” said Faust. “All of us in Cambridge and at Harvard have benefited from his strong leadership, and I am delighted that he will be sharing his experience and skills with the members of the University community in the months ahead.”

Edward Glaeser, the Fred and Eleanor Glimp Professor of Economics and director of the Rappaport Institute for Greater Boston, said he was delighted that Healy would become a fellow because “we have so much to learn” from him.

Noting that Healy oversaw the city’s rise to a triple-A bond rating — the highest credit rating from all three Wall Street rating agencies — Glaeser found other numbers from Healy’s tenure compelling as well. Since Healy took office, Glaeser said, the percentage of Cambridge adults with college degrees rose from 43 to 72, and median income, “in real dollars, has gone up by 85 percent.”

“If we think back to 1981, this was a radically different city,” Glaeser said, noting that the transformation was astonishing. “We know what happens when government fails, when police fail, when a fiscal situation deteriorates. That future could have been Cambridge’s future, and it could have been if not for some of the people in this room, especially Bob Healy.”

Cambridge Mayor Henrietta Davis said that while she had spent the last three weeks celebrating the commencements of various schools and colleges in Cambridge, she was particularly moved to congratulate Healy on his own graduation “from the city of Cambridge, and on to Harvard.”

“The affordable housing empire that we’ve built in Cambridge, the diversity that we treasure so much, our social causes and our libraries — Bob, you led us and brought us together,” Davis said. “We thank you so much for all your hard work and for always encouraging us to work together.”

Introducing his longtime colleague, Richard Rossi said that in addition to “calling [Healy] ‘professor’ for years,” he thought that Healy was a true master both of vision and collaboration.

“The mark of a great manager is being able to pluck the right people to lead missions and make those improvements,” said Rossi, the deputy city manager who will succeed Healy. “Bob had patience, he fought for what he thought was right, and this city is in the best possible shape as a result.”

Kevin Casey, associate vice president for Harvard Public Affairs & Communications, lauded Healy’s ability to get people and institutions to work together. “Building a strong community requires people who believe in it, and who understand the importance of the intersections between institutions, economic development, jobs, and government, and how those intersections can serve to improve lives on the street level. Bob is a wonderful example of that.”

Taking the podium after a two-minute standing ovation, Healy said the night was “not a farewell,” but “a chance to move forward.” He observed that in his career he had seen four presidents come and go from both Harvard and the Massachusetts Institute of Technology, and that working successfully with those institutions, as well as all levels of government, was what made Cambridge such a successful and livable city.

“Local government is where the action is,” he said. “It’s where strong leadership can make things happen. But it is hard, hard work. To achieve it, you need partnerships in a community: partnerships with the great institutions, such as Harvard and MIT, that Cambridge is lucky enough to have. Their presence is an incredible benefit to our community.