Toward a more competitive U.S. 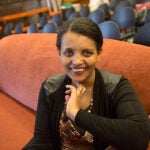 Refusing a ‘diminished self’

Collaboration a theme in discussion around HBS analysis

At an event at Harvard Business School (HBS) that was three parts analysis and one part rally, participants tried to chart a new path forward for the sluggish U.S. economy — a move that may require a new definition of “competitiveness.”

Highlighting the panel discussions Wednesday on “U.S. Competitiveness: Paths Forward,” an HBS initiative, was an appearance by Boston Mayor Thomas Menino, who was brought in by wheelchair but rose to his feet to speak about how the city could be a model for the nation.

“I believe that for America to be more competitive, it must be more collaborative,” Menino said. “This approach delivered results for our city. It will also deliver results to our country.”

The mayor cited development of the South Boston waterfront and the creation of summer jobs for youth. “Just look at what happened after the Marathon attack,” he said. “City, state, and federal official worked together to collect evidence, keep our city safe, and bring the bombers to justice. Everyone put their egos aside.

“Sometimes I wonder if Washington is capable of doing the same,” Menino added. “We have to put away this Democrat-Republican nonsense.  They get elected to help people, but it’s criminal those people in Washington don’t work together, don’t speak together.”

While many people say the country needs to be more competitive, “we don’t have a robust and common understanding of competitiveness,” he said. “What this means is that people who should be allies are at cross-purposes with each other.”

The U.S. Competitiveness Project put forth this definition: “The United States is a competitive nation to the extent that firms operating in the U.S. can compete successfully in the global economy while supporting high and rising living standards for the average American.”

Republicans may focus on the global economy angle, Democrats on the living standards, but “competitiveness occurs when we do both together,” Porter said.

Rivkin put the issue in historical context: “We worried at the beginning of the Industrial Age that the advent of mass production would mean there would be no jobs for the vast majority of the population, but we reinvested and gained productivity and expanded the economy.”

Innovation has driven the country’s strength in world markets and quality of life, said Rosabeth Moss Kanter, the Ernest L. Arbuckle Professor of Business Administration, a panel moderator. “But that strength has to be nurtured.”

She added, “We count on start-ups for job growth in America. Start-ups turn out to be more successful when they are also linked to a rich ecosystem of partnerships and collaborations.”

Three panelists outlined some of those collaborations. Mary L. Fifield, president of Bunker Hill Community College, described that school’s partnership with a consortium of local businesses to create the Learn and Earn program, in which students work a day or two a week at a major corporations, receive mentorship, and are matched with a “work buddy.” The model should be scaled up to include the state’s other 14 community colleges, she said.

Gregory Bialecki, secretary for the Massachusetts Executive Office of Housing and Economic Development, acknowledged that government is used to making rules, not partnerships, and that state officials must now learn to “be more collaborators and not order givers.”

Gerald Chertavian, founder and CEO of Year Up, focused on how education must respond to workforce needs. Today 6.7 million 16-to 24-year-olds with a high school education are out of school and out of work, he said. Yet, “Thirty percent of jobs in this country are middle-skilled jobs, which means you need a high school degree but not necessarily a four-year degree.”

Any discussion of the U.S. economy must include an analysis of the debt, and Robert Kaplan, the Marvin Bower Professor of Leadership Development Emeritus, cheerfully admitted he would provide “the gloomy panel” with David Walker, founder and CEO of Comeback America Initiative. The picture they painted was gloomy, indeed.

“The bottom line is that the government has grown too big, promised too much,  waited too long to restructure, and it needs to restructure sooner rather than later,” Walker said. He said the government lacks three things taught in every management 101 class: a plan, a budget, and metrics for performance. “We’re zero for three — that’s called a strike out.”