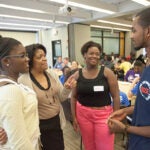 First awarded in 1981, the Harvard Medal recognizes extraordinary service to Harvard University. The service can relate to many aspects of University life — from teaching, leadership, and innovation to fundraising, administration, and volunteerism. President Drew Faust will present the medals at the Annual Meeting of the Harvard Alumni Association on May 30, during Commencement’s Afternoon Program.

James V. Baker has been an active citizen of Harvard, serving both his local community in England as president of the Harvard Club of the United Kingdom, as well as the global alumni community as the HAA’s first international president. He has always maintained an eye toward strengthening Harvard’s relationship with international alumni.

Baker’s commitment to the University has been consistent since his graduation from Harvard Business School (HBS). A recipient of the HAA Alumni Award in 2000, he has served in a number of different capacities, including as an alumni interviewer for both Harvard College and HBS, an HAA elected director, a vice chair of his class gift committee, chair of the Class of 1968 John Harvard Society Leadership Committee, and first marshal of his class.

His work at the local level in the U.K. saw a revitalization of the Harvard Club’s programs and a significant increase in the club’s membership. His talents were then recruited by the HAA to serve as a regional director for Europe. As such, he organized a European Leadership Conference in London, bringing together 16 European clubs from 13 different countries. The success of the conference led to it becoming a regular event, with a different European club acting each year as host. The format has subsequently been used by clubs in South America and Asia.

Following graduation from HBS, Baker worked for Goldman Sachs in London and Zurich, retiring as executive director of the equities division in 1996.

He and his wife, Maggie, are the parents of Chris ’96 and Tanya.

William Thaddeus Coleman Jr. has devoted his life to public service. He was the first African-American to serve as a clerk for a U.S. Supreme Court judge, Justice Felix Frankfurter. Coleman was a contributing author to the landmark 1954 case Brown v. Board of Education, working with Thurgood Marshall at the NAACP Legal Defense Fund and later becoming president of the fund. He was the second African-American to serve in a presidential cabinet, as the nation’s fourth secretary of transportation during the Ford administration. In 1995, he was a recipient of the Presidential Medal of Freedom. Most recently, he has served as a judge of the U.S. Court of Military Commission Review.

Coleman was first in his class at Harvard Law School (HLS) and was an editor of the Harvard Law Review, and his call to service has extended to the University as well. He has served as an Overseer and has been a member of five Overseer visiting committees — Law School, Business School, Center for International Affairs, Institutional Policy, and Social Studies. He is a recipient of the HBS Distinguished Service Award, the Harvard Law School Association (HLSA) Award, and the Harvard Club of Washington, D.C., Public Service Award, and he has been an HLS Traphagen Speaker. He has also been a member of the HLS Dean’s Advisory Board since 1997.

Coleman and his wife, Lovida, have three children, Lovida, William, and Hardin.

Georgene Botyos Herschbach has made enduring contributions to the University and is among its most valued and selfless citizens. After serving as co-master of Currier House with her husband, Dudley, she embarked on a wide-ranging career at Harvard College, including: assistant dean and director of special programs, registrar of the Faculty of Arts and Sciences, associate dean of academic programs, and dean of administration. Exemplifying all that Harvard holds dear, she worked tirelessly in support of many initiatives to enhance the experience of undergraduates.

Having earned her Ph.D. in chemistry, Herschbach brought astute analysis to shaping policy as well as advising students, mentoring fledgling administrators, and counseling senior colleagues. She collaborated with faculty in developing innovative interdisciplinary courses in the life and physical sciences, and was a co-founder of PRISE (Program for Research in Science and Engineering), a summer program in which undergraduates work with faculty on projects at the frontiers of science.

Herschbach’s family life has also been deeply involved with Harvard. While a Harvard graduate student, she married Dudley Herschbach, Ph.D. ’58, and became the mother of two daughters, Lisa, Ph.D. ’97, and Brenda, ’88, A.M. ’88, J.D. ’98.  For this family, the sum of their years as Harvard students plus Georgene’s three decades in administration and Dudley’s four on the faculty, totals a full century.