The trouble with Kepler 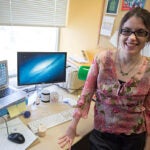 NASA announced a problem on Wednesday that threatens to cripple one of its highest-profile missions, the Kepler Space Telescope, an instrument dedicated to finding Earth-like planets orbiting other stars.

Since its launch in 2009, Kepler has found 130 planets orbiting other stars and 2,500 planet candidates requiring further investigation. The space telescope has pulled back the veil on the true nature of the Milky Way, showing it to be a galaxy rich with planets, and potential homes for life outside of Earth.

Gazette staff writer Alvin Powell discussed the problem with one of Kepler’s co-investigators, Astronomy Professor Dimitar Sasselov, asking what the glitch means for Kepler, for the quest for extra-solar planets, and for the search for life outside the solar system.

GAZETTE: Can you tell us what is going on with Kepler?

SASSELOV: The telescope needs to point very precisely in the direction in which it takes images. That pointing has been compromised by the breakdown of one of the reaction wheels — or gyroscopes — which keep it aligned.

The wheels come in packages of four, with three needed and one a spare. We lost one last July, so we have been without the spare since then. Losing a second one means that the telescope cannot point, and hence the images are not precise enough for us to continue the scientific mission of the telescope.

GAZETTE: Are there potential fixes or workarounds being considered?

SASSELOV: What is happening now is an immediate assessment, and within a few days we’ll know the results. It’s very likely the engineers will test and implement some new workarounds in the coming weeks, trying to recover the wheel functionality. So they’re not going to write it off.

However, there is no obvious workaround. We were forewarned that this may happen when the spare stopped working last July. So I don’t think there was a clear path to solve this if the second wheel really got stuck.

GAZETTE: What are the implications for Kepler’s scientific mission?

SASSELOV: We have collected data for a little bit more than 17 quarters. Only about two-thirds of that has been analyzed or downloaded to the ground. Inevitably, there is always a delay between what the telescope has obtained — in the can, so to say — and that data having been fully reduced and analyzed.

In the next year and probably more, there will be analysis of data that is currently on the spacecraft. When that is done, you can say the scientific mission has been completed. You will continue hearing about Kepler discoveries at least for the next two or three years. It is not over yet.

GAZETTE: Will the problem interfere with transmission of data already collected to the ground?

GAZETTE: Just about a year ago, NASA extended Kepler’s mission through 2016. What had scientists hoped to learn during the additional time?

SASSELOV: The telescope would gather additional data that would improve dramatically our statistical confidence of our final results. It was also kind of a no-brainer. The telescope was working fine and taking great data. At a minimal expense, you continue to use it.

GAZETTE: Can we say Kepler has been successful, whatever the outcome of attempted workarounds for the balky wheel?

SASSELOV: It’s been a resounding success. Not only because you hear about it in the news all the time, but because when you look at what we knew [before it launched] and what we know about exoplanets from all our other efforts combined, Kepler stands way above all of them.

So just by sheer volume, it provided us new insights and data to understand how planets form, what they are, and where they are. [Kepler] has provided us with a mother lode of planetary systems that we will be exploring for decades in the future, not just a few years, but decades. Kepler has already delivered beyond expectations. So it was worth every penny.

GAZETTE: What’s the feeling of the scientific team now?

SASSELOV: Obviously, we were very excited about the extension, and we did expect to find exciting new things in the additional four years. You shouldn’t be surprised that the team would feel that we have the best telescope working, and it’s a shame if it cannot deliver more.

Now we can forge ahead and plan our next steps. Kepler was able to accomplish two things. One was the research and new discovery. The other was helping prepare so the next step in our exploration is successful. That has been done, and, for posterity, that’s probably the most important thing. Now we have TESS [the Transiting Exoplanet Survey Satellite] already approved.

GAZETTE: Is TESS the next step or is the James Webb Space Telescope?

SASSELOV: Both. They go hand in hand. Kepler was supposed to deliver the numbers, the frequency of planets the size of the Earth around solar-type stars in the habitable zone.

Now, we want not simply to improve the number, we want to find those planets we can study directly with high precision. Now we want to find the nearest ones. There, we need TESS to discover them, and then we need James Webb to analyze them.

GAZETTE: Any possibility of a Hubble-like rescue for Kepler?

GAZETTE: How does this change the work of researchers at Harvard?

SASSELOV: A lot of this does relate to our efforts here at Harvard. Last summer, we installed a new spectrograph on the Canary Islands, together with our colleagues from Geneva. It is currently the highest-precision spectrograph in the world, and it has the specific goal to observe the planets that Kepler has discovered.

The demise of the Kepler telescope would have very little effect on our plans for the work with the spectrograph because we already have the data. Once you identify the planets with Kepler, then you pick the best candidates and spend one to four years observing them with the spectrograph to determine the planet’s precise parameters.

So in a certain sense, that second step has been happening for the past year. The original plan was that Kepler would gather data for four years, and then we’d continue with HARPS North, our spectrograph, for another four years. So from that point of view, our work here at Harvard is going on as scheduled.