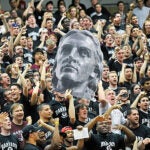 A year of change, month by month

Lillian Langford’s life could have turned out much differently. Instead of graduating now with two Harvard degrees, she could have been on a remote island in the South Pacific, or on a stage playing the harp with a classical orchestra.

But a series of inspiring mentors, starting with her parents, helped guide her to her life’s passion: fighting injustice.

“They were clear on their dedication to public service, being part of the community, and giving back,” said the Florida native. Her father and mother engaged in public service work through their local church. Her mother also volunteered on the board of a mental health nonprofit organization that, among other things, helped women who suffered from domestic abuse. “I just remember how much time she devoted to doing that,” Langford said.

From Cambridge, Langford will head for Kyrgyzstan with a J.D. from Harvard Law School (HLS) and a master’s degree in public policy from the Harvard Kennedy School (HKS), on a Fulbright fellowship to continue work she began last year helping marginalized groups gain access to justice, particularly women forced into undocumented marriages.

But Langford’s path wasn’t always so clear. An accomplished harpist, she attended Emory University planning to concentrate in music and psychology, considering a career in classical music. Then her first trip abroad, as part of an Emory program in Samoa studying childhood development, changed everything.

“I had seen poverty in my community, but I had never seen anything quite like that. And I realized how little exposure I had to how much of the rest of the world lives.”

She wanted to stay and help, until her college mentor, who had organized the trip, convinced her that the best way to make a difference was for her to return home and finish her education. “He wisely advised me not to take the rebellious path,” Langford said. Instead, she dropped her concentration in music and graduated a year early with a psychology degree.

After college, a series of public service jobs followed, including with the public defender’s office in Florida, with a nongovernmental organization in Kenya, and then in India, where another mentor was helping Pakistani refugees — “living in purgatory” and forced into dangerous jobs — to gain citizenship.

“He was absolutely my role model. I was amazed by the work he was doing. That was really the catalyst for going into a career as a human rights lawyer,” Langford said.

She applied and was accepted at HLS. During her first semester in Cambridge, Langford started spending time across campus at HKS, attending lectures and events. When she heard about Harvard’s joint program in law and government, she jumped at the prospect.

“I was just increasingly interested in the intersection of government foreign policies and human rights, and HLS and HKS were both the perfect places for that,” said Langford, who plans to research barriers to justice, make recommendations in line with international law, and “bridge the policy divide” with her work after graduation.

During her Harvard days, Langford said she drew inspiration from another sort of mentor: her classmates.

“One of the great benefits of being at Harvard is you are constantly immersed in this environment of incredibly brilliant people doing amazing things with their intelligence. That’s really helped drive me forward. Just to be able to look around and see the way that the people around me are shaping the world and will be shaping the world is incredible.”

Her classmates likely think the same thing about her.