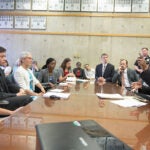 Suppose you’re opening a restaurant next week, and you need signs for the restrooms. Which would you choose — signs with images that represent men and women, or signs that simply say “Men” and “Women”? Now suppose the restaurant won’t open until next year — would your choice change?

A Harvard researcher has answers.

In research described earlier this year in the Personality and Social Psychology Bulletin, Elinor Amit, a College Fellow in psychology, along with two collaborators, Cheryl Wakslak and Yaacov Trope, showed that people increasingly prefer to communicate verbally (versus visually) with people who are distant (versus close) — socially, geographically, or temporally.

“The reason is that language is generally a more abstract form of communication than pictures,” Amit said. “Because words are abstract, they preserve the gist and omit incidental details. For example, the word ‘car’ omits information about the color, the size, the number of doors, and so on. Therefore, words enable shared reality with social partners who exist in different times, remote locations, and are different from the self, and therefore may not have the same access to those incidental details, and thus for whom a concrete picture may not be relevant or understandable. For example, a pictorial message that was sent recently would be more comprehensible than a pictorial message from long ago. In contrast, verbal messages have a better chance of being understood across time periods.”

In one, researchers asked students to help them in designing a generic member profile page that would appear on a dating website, then measured how many pixels of screen area were devoted to images and text. Students who were told the site would launch in six months typically devoted more screen area to text versus images, Amit said, while students told the site would launch in a week designed profiles that gave equal space to both images and text.

That contrast in how people prefer to communicate with others is related to the way people think about objects and events near and far.

“If you’re going to a conference in a year from now, you don’t need to check the number of the bus line that runs from the airport to the hotel, what exactly you will wear, or even what will appear on the third slide of your PowerPoint presentation — that’s too much information,” Amit said. “But if the conference is tomorrow, you do need to know that. This idea is consistent with a theory from social cognition, construal level theory, which suggests that people think more abstractly about distal versus proximal things.”

Amit also suggested that the preference for different forms of communication for proximal and distal things mirrors the way language develops, indicating that those preferences are deeply ingrained in the brain.

“If you think about the way language develops in children, even before they know how to talk, they can communicate visually,” she said. “One reason for that may be because, early in their life, they only need to communicate with people that are proximal to them — like parents, grandparents, and perhaps a nanny.”

As a child’s social sphere expands, and as the need to communicate with more and more people grows, so too does the development of language.

While such communication preferences may be unconscious, Amit said, it is possible for people to use various methods of communication as a tool to either shrink or enlarge distances. As an example, she pointed to the way someone might use video-chatting software like Skype to create the illusion of being closer to far-flung family and friends.