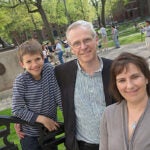 After spending 13 years raising three boys, Stephanie Connolly wanted to get back into the workforce, but she was worried that her computer skills were obsolete.

Not only was the long employment break a concern, but she had never used Microsoft’s Office programs. Her last employer had only used WordPerfect.

A year later, Connolly is so well-versed in Word, Excel, and PowerPoint that she is helping others, and just completed a stint as a teaching assistant in a computer class. She’s also on the job hunt, armed with a new résumé, freshly honed interview skills, and state-of-the-art knowledge of how to conduct Internet job searches, fill out Web-based applications, and upload resumes.

“I can walk through the doors of the company and feel very confident,” said Connolly. “They [the course instructors] have given that to me.”

Connolly, who lives in Brighton, credited her development to classes offered by the Harvard Allston Workforce Development Collaborative. The collaborative is part of a rich suite of programs, grants, and neighborhood improvements that stem from an agreement struck between Harvard University and the city of Boston five years ago.

The Education Portal is an example of where Harvard has gone over and above the terms of the agreement. It takes the strengths of the University and brings them to the community, to kids, to parents, and to teachers.” — Linda Kowalcky, deputy director of the Boston Redevelopment Authority

What that has meant to the neighbors is the opening and expansion of the Harvard Allston Education Portal, a community-centered education facility that serves as Harvard’s front door to the neighborhood; access to certain University programs and facilities; more green space, in the form of the 1.74-acre Ray V. Mellone Park; and new resources, in the form of grants to community organizations and nonprofits that have totaled $500,000 in five years. (Information about the agreement’s benefits to the community, as well as about Harvard’s deep ties with Cambridge and Boston, are available on the new community-oriented Public Affairs website, which launched earlier this month.)

“Harvard is an engaged community partner and is committed to projects, educational and outreach programs, and other initiatives that benefit Allston,” said Kevin Casey, associate vice president of Harvard Public Affairs & Communications.  “The programs implemented over the past five years have created a solid foundation of meaningful community engagement to build upon as we enter into this next phase of community benefits associated with our new institutional master plan.”

An Ed Portal “over and above”

The Harvard Allston Education Portal is perhaps the centerpiece of the University’s burgeoning relationship with the Allston-Brighton neighborhood. It opened in 2008 with mentoring and after-school enrichment programs aimed at local schoolchildren, including those at nearby Gardner Pilot Academy, the closest public school to Harvard’s Allston campus.

Over the last five years, 80 Harvard undergraduates have provided mentoring for 300 neighborhood students, and programming has grown to include the Workforce Development Collaborative’s computer and job-readiness classes, a lecture series that brings the Harvard faculty’s cutting-edge research to a community audience, and an outdoor farmers market that runs from June through October.

The free Ed Portal membership is open to any neighborhood resident. Membership has grown rapidly from 455 in 2009 to 1,700 this year. The facility has grown as well, with an annex opening last year that tripled its size.

“What began as a thoughtful but modest program of mentoring has blossomed into a full array of programs for kids, adults, seniors, and residents who speak other languages,” said Linda Kowalcky, deputy director of the Boston Redevelopment Authority.

Kowalcky, who helped to negotiate the cooperation agreement for the city, said that while there are aspects of the agreement tied to the science center construction process that have yet to be implemented, Harvard has carried out its non-construction-related obligations, and in some cases exceeded them.

“The Education Portal is an example of where Harvard has gone over and above” the terms of the agreement, Kowalcky said. “It takes the strengths of the University and brings them to the community, to kids, to parents, and to teachers.”

The key to the Education Portal’s success has been the University’s commitment to treat the relationship with the community as a core priority, said portal faculty director Robert Lue, professor of the practice of molecular and cellular biology.

Lue said he views the facility as something of a “sandbox” where innovative ideas about how to strengthen the relationship between the University and the community — while enhancing the understanding of learning — can be suggested and tried out.

“People who have great ideas and great energy need a place to do it,” Lue said. “It’s not something built separately. Sharing and outreach truly must come from the heart, and be an extension of the core priorities of the University.”

A longstanding community resource in Allston that predates the cooperation agreement is Harvard’s Ceramics Program, managed by the Office for the Arts. The program was founded in Cambridge in 1969 and has been located since 1987 at its studio at 219 Western Ave. In addition to events for all ages, presented in collaboration with the Ed Portal, the program provides adult ceramics classes, workshops, and seminars led by highly skilled artists and scholars from around the world, drawing about half of its student body from the University and half from the community. It also sponsors a semi-annual show and sale, which this month drew a record number of attendees. In the fall, the program will increase its visibility and commitment to the Allston community by moving to 224 Western Ave., where a large studio will feature enhanced amenities, including a dedicated exhibition space at street level.

The cooperation agreement also provides for the Harvard Allston Partnership Fund, through which the University has distributed $100,000 a year for the past five years. The funds have gone to 20 organizations, including the Friends of the Honan-Allston Library, the Oak Square YMCA, the Charles River Watershed Association, and the Fishing Academy, a nonprofit that runs summer camps for urban youth. Because of its success and popularity, the fund was extended this year for five more years as part of the planned relocations associated with the Barry’s Corner mixed-use development.

Fishing Academy Executive Director John Hoffman said the funds have provided scholarships for youth from Allston-Brighton, most of whom had never cast a line, tied a knot, or baited a hook. The weeklong camp provides two days of freshwater fishing in nearby ponds and then three days of fishing on the Boston Harbor islands, cruising aboard a local charter fishing boat, and taking a turn on the academy’s own boat.  In 2012, the academy received more than $5,000, which provided scholarships for 45 youths.

“Without support from the Harvard Allston Partnership Fund, a lot of local kids wouldn’t be able to get into the outdoors and participate in such a fun and educational experience,” Hoffman said. “It really is a program that can actually change the course of some of the kids’ lives.”

Carin O’Connor, librarian at the Boston Public Library’s Honan-Allston Branch, applied for partnership funds to enhance the library’s offerings for adult education. The funds were used to buy seven sewing machines and hire an instructor so the library could offer sewing and quilting classes. O’Connor said the partnership funds, which went to Friends of the Honan-Allston Library, are essential, since city budget cuts have meant the library had no funds for programming.

“It absolutely would not have been possible,” O’Connor said. “Adults really like getting back into making things. Why should the kids have all the fun?”

Camps and programs and scholarships, oh my!

While the Education Portal provides a physical focus for the partnership between Harvard and the Allston-Brighton community and the Partnership Fund extends resources into the community, a variety of scholarships give community members access to programs at the University.

Since 2008, 556 academic and recreational scholarships have been given to Allston-Brighton youth and adults. Each year, 50 scholarships allow adults to attend the Harvard Extension School, and each summer 50 more allow neighborhood youth to participate in summer camps for tennis, baseball, and swimming.

Last year, Erica Herman, principal of the Gardner Pilot Academy, attended instructional rounds at the Graduate School of Education’s Principals’ Center, with three other Gardner faculty members. Herman called the four days of professional-development classes “an eye-opening, challenging, wonderful opportunity,” one that should be experienced by other teachers at the school.

Herman said the Ed Portal’s mentoring program provides Pilot Academy children, ranging from kindergarten through sixth grade, a chance to interact with Harvard students and to see that college is a possibility for them.

Herman, who sits on the Education Portal’s advisory board, said that while Harvard has long had a partnership with the community, the two-way communication is better now. She looks forward to seeing the relationship continue to expand.

“There is definitely a deeper presence of Harvard in our community, in our school,” Herman said. “It’s not that Harvard has never been a partner, but the partnership has deepened. There’s a much stronger presence and a two-way conversation.”