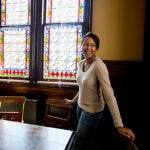 Discovering the path to Harvard

Diana Sorensen is one of four new trustees of the National Humanities Center, one of the leading institutes for advanced study in the world and the only one dedicated exclusively to the humanities. Sorensen, Harvard’s dean of arts and humanities and a professor of comparative literature, was appointed alongside William D. Cohan, Leslie Fahrenkopf Foley, and Kevin M. Guthrie.

Sorensen, the James F. Rothenberg Professor of Romance Languages and Literatures, is a decorated scholar of Latin American literature and culture, and has published extensively on these subjects, including most recently “A Turbulent Decade Remembered: Scenes from the Latin American Sixties” (2007).

“The center has been extremely fortunate in its trustees, and we look forward to the insight and leadership that Mr. Cohan, Ms. Fahrenkopf Foley, Mr. Guthrie, and Dean Sorensen bring with them,” said Geoffrey Harpham, president and director of the center.

For more information on the trustees.