Shining a light on an era 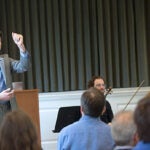 Creative bursts from all corners

In 1854, a young man slipped out of Virginia on a ship to Boston, leaving slavery behind. But his freedom was short-lived. Several months after Anthony Burns arrived, his owner, citing the Fugitive Slave Act of 1850 as legal justification, seized him. Burns’ arrest enraged local abolitionists, fueled a deadly riot, and spurred a burgeoning anti-slavery movement.

A new production at the A.R.T. developed by director Steven Bogart and members of the A.R.T. Institute, the theater’s graduate training program, shines light on the plight of Burns and the Boston abolitionists who tried to free him.

“It was a moment in Massachusetts history where the entire area — Boston, Cambridge, all the way from Worcester to Newburyport — rallied to try to save this man from going back into slavery,” said Bogart, who directs “The Boston Abolitionists Project.” The collaborative work is part of the National Civil War Project, a multiyear collaboration among Harvard, the A.R.T., and several other arts and academic organizations that have joined forces to create theatrical works and educational programs about the Civil War and the issues surrounding it.

Bogart’s creative journey with the new play began last fall at a roundtable discussion with Harvard scholars and artists, part of the four-year national project. He also met with Harvard specialists in the field, including Timothy McCarthy, a lecturer on history and literature and the director of the Sexuality, Gender, and Human Rights Program at the Harvard Kennedy School’s Carr Center for Human Rights Policy, to explore the era’s complexities.

“Tim has been really instrumental in sending us in the right direction, suggesting resources and other associations in terms of the historical time period,” said Bogart. “This is the first time I have tried to devise a piece based on a historic event with historic characters, and the idea of connecting with Harvard professors who are experts in the field was really exciting, and absolutely necessary.”

The Burns trial is the underlying theme of the production, whose large cast of characters includes a lawyer for the captured man, and prominent abolitionists such as Harriet Jacobs and William Lloyd Garrison. The production also features readings from “Uncle Tom’s Cabin,” the anti-slavery novel by Harriet Beecher Stowe that “took the nation by storm and was part of the fuel for the abolitionist movement,” said Bogart.

McCarthy, who teaches the general education course “Culture and Belief 49: American Protest Literature from Tom Paine to Tupac” with John Stauffer, chair of the History of American Civilization Program and another consultant on the show, said the experience inspired him to think differently about “how history can come alive.” McCarthy hopes to integrate the theater process into the class, along with a sense of how theater “creates public space for us to engage with and debate matters of great political consequence.”

This summer, he’ll also try his hand at playwriting with a work about four prominent female abolitionists.

“As historians we piece together fragments from the past and create a story that will resonate with or tantalize or inspire an audience of readers,” said McCarthy. “[This] really challenged me to think about how history comes alive for an audience of viewers.”

In many ways, the intensely collaborative process, which included input from Bogart, Harvard professors, and A.R.T. Institute students and staff, mirrored the kind of movement that the creative team sought to dramatize, said McCarthy.

“It really reflects the spirit of the abolitionist movement, which was not a movement that was led by one or two prominent people. This was a collective effort that was led over several decades to eradicate slavery.”

“The Boston Abolitionists Project” will be performed in the Loeb Experimental Theater at 7:30 p.m. through Friday.