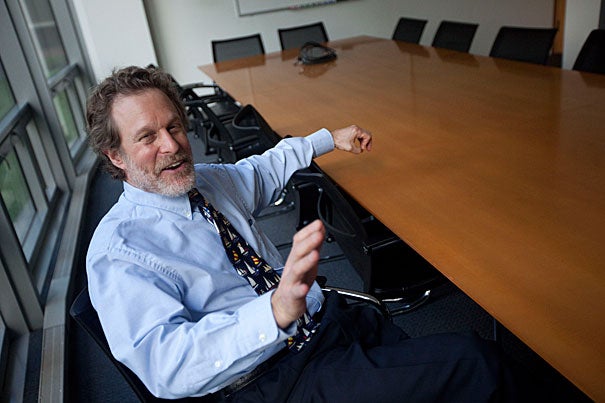 Last summer, in a Harvard robotics laboratory, an insect took flight. Half the size of a paper clip, weighing less than a tenth of a gram, it leapt a few inches, hovered for a moment on fragile, flapping wings, and then sped along a preset route through the air.

Like a proud parent watching a child take its first steps, graduate student Pakpong Chirarattananon immediately captured a video of the fledgling and emailed it to his adviser and colleagues at 3 a.m. — subject line: “Flight of the RoboBee.”

“I was so excited, I couldn’t sleep,” recalls Chirarattananon, co-lead author of a paper published this week in Science.

The demonstration of the first controlled flight of an insect-sized robot is the culmination of more than a decade’s work, led by researchers at the Harvard School of Engineering and Applied Sciences (SEAS) and the Wyss Institute for Biologically Inspired Engineering at Harvard.

“This is what I have been trying to do for literally the last 12 years,” says Robert J. Wood, Charles River Professor of Engineering and Applied Sciences at SEAS, Wyss core faculty member, and principal investigator of the National Science Foundation-supported RoboBee project. “It’s really only because of this lab’s recent breakthroughs in manufacturing, materials, and design that we have even been able to try this. And it just worked, spectacularly well.”

I want to create something the world has never seen before. It’s about the excitement of pushing the limits of what we think we can do, the limits of human ingenuity.”   Kevin Y. Ma, a graduate student at SEAS

Inspired by the biology of a fly, with submillimeter-scale anatomy and two wafer-thin wings that flap almost invisibly, 120 times per second, the tiny device not only represents the absolute cutting edge of micromanufacturing and control systems, but is an aspiration that has impelled innovation in these fields by dozens of researchers across Harvard for years.

“We had to develop solutions from scratch, for everything,” explains Wood. “We would get one component working, but when we moved onto the next, five new problems would arise. It was a moving target.”

Flight muscles, for instance, don’t come prepackaged for robots the size of a fingertip.

“Large robots can run on electromagnetic motors, but at this small scale you have to come up with an alternative, and there wasn’t one,” says co-lead author Kevin Y. Ma, a graduate student at SEAS.

The tiny robot flaps its wings with piezoelectric actuators — strips of ceramic that expand and contract when an electric field is applied. Thin hinges of plastic embedded within the carbon fiber body frame serve as joints, and a delicately balanced control system commands the rotational motions in the flapping-wing robot, with each wing controlled independently in real time.

At tiny scales, small changes in airflow can have an outsized effect on flight dynamics, and the control system has to react that much faster to remain stable.

The robotic insects also take advantage of an ingenious pop-up manufacturing technique that was developed by Wood’s team in 2011. Sheets of various laser-cut materials are layered and sandwiched together into a thin, flat plate that folds up like a child’s pop-up book into the complete electromechanical structure.

The quick, step-by-step process replaces what used to be a painstaking manual art and allows Wood’s team to use more robust materials in new combinations, while improving the overall precision of each device.

“We can now very rapidly build reliable prototypes, which allows us to be more aggressive in how we test them,” says Ma, adding that the team has gone through 20 prototypes in just the past six months.

Applications of the RoboBee project could include distributed environmental monitoring, search-and-rescue operations, or assistance with crop pollination, but the materials, fabrication techniques, and components that emerge along the way might prove to be even more significant. For example, the pop-up manufacturing process could enable a new class of complex medical devices. Harvard’s Office of Technology Development, in collaboration with Harvard SEAS and the Wyss Institute, is already in the process of commercializing some of the underlying technologies.

“Harnessing biology to solve real-world problems is what the Wyss Institute is all about,” says Wyss Founding Director Don Ingber. “This work is a beautiful example of how bringing together scientists and engineers from multiple disciplines to carry out research inspired by nature and focused on translation can lead to major technical breakthroughs.”

And the project continues.

“Now that we’ve got this unique platform, there are dozens of tests that we’re starting to do, including more aggressive control maneuvers and landing,” says Wood.

After that, the next steps will involve integrating the parallel work of many different research teams that are working on the brain, the colony coordination behavior, the power source, and so on, until the robotic insects are fully autonomous and wireless.

The prototypes are still tethered by a very thin power cable because there are no off-the-shelf solutions for energy storage that are small enough to be mounted on the robot’s body. High-energy-density fuel cells must be developed before the RoboBees will be able to fly with much independence.

Control, too, is still wired in from a separate computer, though a team led by SEAS faculty Gu-Yeon Wei and David Brooks is working on a computationally efficient brain that can be mounted on the robot’s frame.

“Flies perform some of the most amazing aerobatics in nature using only tiny brains,” notes co-author Sawyer B. Fuller, a postdoctoral researcher on Wood’s team who essentially studies how fruit flies cope with windy days. “Their capabilities exceed what we can do with our robot, so we would like to understand their biology better and apply it to our own work.”

The milestone of this first controlled flight represents a validation of the power of ambitious dreams — especially for Wood, who was in graduate school when he set this goal.

“This project provides a common motivation for scientists and engineers across the University to build smaller batteries, to design more efficient control systems, and to create stronger, more lightweight materials,” says Wood. “You might not expect all of these people to work together: vision experts, biologists, materials scientists, electrical engineers. What do they have in common? Well, they all enjoy solving really hard problems.”

“I want to create something the world has never seen before,” adds Ma. “It’s about the excitement of pushing the limits of what we think we can do, the limits of human ingenuity.”