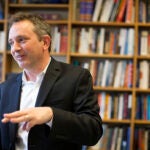 Fellows to engage in science of toys, comedy of tragedies, design of destruction

They will study everything from the designs of destruction to the science of toys, from adapting Greek theater to taming water-borne ailments.

They are the 50 diverse artists and scholars who have been selected as fellows at the Radcliffe Institute for Advanced Study at Harvard University. They will have a year of discovery in which to write books, create art, pioneer research, and bring together theory and practice.

During the 2013-2014 academic year, these women and men from across Harvard and around the world come to Radcliffe to pursue projects across the arts, humanities, sciences, and social sciences. They are junior faculty, tenured faculty, and independent scholars and artists who will spend a year at Harvard’s institute for advanced study to pursue and enhance their projects in a rich, multidisciplinary environment.

Dean Lizabeth Cohen, a former Radcliffe Fellow herself, explained, “We provide innovative thinkers with the time and space to follow new ideas wherever they lead. Most scholars and artists are consumed with teaching responsibilities, administrative duties, and short-term deadlines for producing work, so a year at Radcliffe helps them reconnect with their intellectual and artistic passions and helps the public benefit from their brilliance.”

We provide innovative thinkers with the time and space to follow new ideas wherever they lead. — Radcliffe Dean Lizabeth Cohen

Only 5 percent of applicants were accepted to the fellowship program, an admission rate comparable to Harvard College.

The fellows hail from across the United States and around the world, including India, Turkey, and the United Kingdom.

Lucia Allais, a junior professor of architecture at Princeton University, will undertake a project called “Designs of Destruction: Architectural Preservation in the Age of Total War” about the process of protecting monuments of art and architecture from destructions of war and modernization in the 20th century.

Political scientist Claudine Gay, in Harvard’s Government Department, will be exploring connections between the distribution of funds through the Low-Income Housing Tax Credit Program and electoral support. The title of the project is “Policy and Patronage: The Distributive Politics of American Housing Policy.”

Historian Linda Gordon, from New York University, will write a book about 20th century American social movements that will include the Settlement House movement, the Ku Klux Klan, several New Deal era movements, the Civil Rights Movement, and SDS (Students for a Democratic Society) and women’s liberation. The title of her project is “Social Movements in the 20th Century U.S.: Modeling Historical Analysis.”

Director and playwright Sean Graney, the founder of the Hypocrites theater company in Chicago, will work on adapting the 32 surviving Greek tragedies into an epic theater event called “All Our Tragic” that brings together modern verse, humor, and universal themes in contemporary times. While at Radcliffe, he will work closely with colleagues at the American Repertory Theater, where he is currently directing “Pirates of Penzance.”

Jennifer Hoffman is an associate professor of physics at Harvard who last year won the prestigious Roslyn Abramson Award given annually to recognize assistant or associate professors for accessibility, dedication, and excellence in undergraduate teaching. During her fellowship year, she will pursue her own research priorities with a project called “Enabling Nanoscale Imaging of Complex Oxides through Novel Film Growth Techniques.”

Economist Michael Kremer, the Gates Professor of Developing Societies in the Department of Economics at Harvard, will bring together Harvard faculty and other experts to focus on “Water, Health, and Human Behavior.” The project is designed to apply ideas from the fields of household and behavioral economics to the prevention of water-related diseases in Africa and South Asia.

Author Julie Orringer, who wrote the novel “The Invisible Bridge” and “How to Breathe Underwater,” a collection of short stories, comes to the Radcliffe Institute to write her next book. Orringer’s subject is the impact of American journalist-turned-rescue worker Varian Fry, who saved thousands of people — especially artists and writers — during the Second World War.

Tadashi Tokieda is the director of studies in mathematics at Trinity Hall, University of Cambridge (UK). He has collected and created dozens of toys that are useful for entertainment, for research, and for “communicating surprises of mathematics and science.”  For his project “Toys in Applied Mathematics,” Tokieda will devise new toys, improve old toys, and develop multimedia illustrations of how they work.

These fellows, and more than 40 others, begin their fellowship year in August. Over the course of the year, they will share their work through presentations and gallery exhibits. Many will engage Harvard College students in their projects as research assistants.

More information about the individuals and their projects is online.