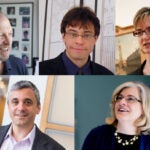 Actor and arts advocate will be awarded Radcliffe Medal

Jane Alexander, actor and arts advocate, will be awarded the Radcliffe Medal on Friday, Radcliffe Day 2013. The medal is given to individuals whose life and work have significantly and positively influenced society.

The Radcliffe Institute for Advanced Study will celebrate the arts with a morning panel that unites leaders across the visual arts, writing, music, and theater. It will be immediately followed by the annual Radcliffe Day lunch, featuring an address by Alexander.

Dean Lizabeth Cohen will present the Radcliffe Medal to Alexander in honor of the courage she has shown as an actor and as a champion for the arts during her tenure as the head of the National Endowment for the Arts (NEA) from 1993 to 1997. Alexander’s acting roles — including “The Great White Hope,” which confronted race and segregation in the Jim Crow era, “All the President’s Men,” and “Kramer vs. Kramer” — have earned four Oscar nominations, seven Tony nominations and one win, and nine Emmy nominations and two wins. As the first working artist to chair the NEA, Alexander fought to protect arts funding in the 1990s when it came under fire by Congress.

“For the arts to thrive and contribute to the quality of Americans’ private and public lives, we need bold and passionate leaders,” said Cohen. “Jane Alexander’s work as an actor and as an advocate provides a model for how one individual can raise national consciousness about the critical role the arts play in shaping ideas and advancing creative thinking. We celebrate the power of the arts at Radcliffe throughout the year and especially on Radcliffe Day this year.”

The panel, titled “From Artist to Audience,” will feature five individuals who will discuss the challenges they face as artists — and that the United States faces as a society — in garnering the support needed to bring art to audiences.

Diane Paulus ’88, artistic director at the American Repertory Theater (A.R.T.) and a professor of the practice of theater in Harvard University’s English Department, will moderate. At the A.R.T., her groundbreaking work, including “The Gershwins’ Porgy and Bess” and “Prometheus Bound.”

Poet, essayist, playwright, and teacher Elizabeth Alexander, RI ’08, who composed the poem “Praise Song for the Day” and delivered it at the 2009 inauguration of President Barack Obama, is the chair of the Department of African American Studies at Yale University.

Painter Beverly McIver, RI ’03, who produces art that consistently examines racial, gender, and social identity, is a professor of art at North Carolina Central University. She and her sister Renee were the focus of the 2012 documentary “Raising Renee,” directed by Jeanne Jordan, BI ’93, RI ’03. Jordan met McIver in 2003 at the Radcliffe Institute when they were both fellows.

Mark Robbins, RI ’03, is the executive director of the International Center of Photography, an institution dedicated to the practice and understanding of photography in all its forms. He is an artist who uses photography to examine people and their built environment. Previously, Robbins was the dean of Syracuse University’s School of Architecture and served as the director of design at the NEA.

Augusta Read Thomas, BI ’91, is among the world’s most accomplished and original contemporary composers. The American Academy of Arts and Letters cited the “unbridled passion and fierce poetry” embodied in her works and recognized her as “one of the most recognizable and widely loved figures in American music.”

On Radcliffe Day, hundreds of alumnae/i, fellows, and friends gather to build on the legacy of Radcliffe College and to celebrate the Radcliffe Institute’s dedication to sharing transformative thinking, supporting innovative research, and advancing ideas that illuminate our world.