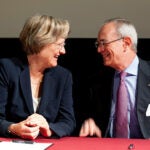 Korean pop trailblazer PSY will speak at Harvard on Thursday. The event will be moderated by Carter Eckert, Yoon Se Young Professor of Korean History, with Alex Zahlten, assistant professor of East Asian languages and civilizations, as discussant.

A live stream of the event will be available online at harvard.edu/live-stream.

Best known for his 2012 smash hit “Gangnam Style,” the multiplatinum single that merged Korean flavor with global pop panache, PSY has mesmerized critics and fans worldwide with his enigmatic dance moves and unforgettable presence. The first music video in history to surpass 1 billion views on YouTube, the song went on to become both the “most-viewed” and “most-liked” on the site. His 2013 follow-up “Gentleman” has nearly 300 million views in three weeks and set a new YouTube record with 38 million views in a single day.